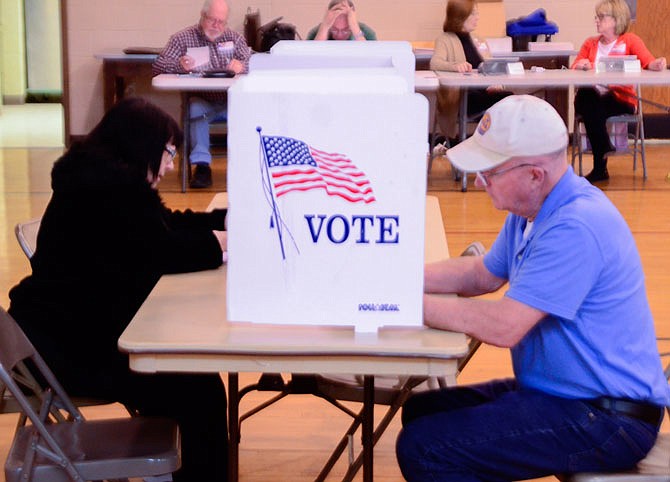 Holts Summit residents exercise their civic duty by voting in the April 4, 2017 municipal election. Despite a projected voter turnout of 10 percent, 25 percent of Holts Summit voters participated in the election, according to the Callaway County Clerk's office.

"We had quite a few on the first day," Hubbard said.

Each position comes with certain requirements for potential candidates. To see the whole list, visit bit.ly/2FjuCGo.

Primaries take place Aug. 7 and the general election Nov. 6. Those filing must present identification, file a declaration for candidacy, complete Form 5120 (affidavit of tax payments) and complete a personal financial disclosure for the Missouri Ethics Commission.

As of Monday, the following candidates filed:

For presiding county commissioner, incumbent Gary Jungermann, of Fulton, a Republican; and Tim Kendall, of Auxvasse, a Democrat.

For county clerk, Ronda Lea Miller, of Fulton, and Kathie Ratliff, of Kingdom City, both Republicans.

For recorder of deeds, incumbent Christine Kleindienst, of Fulton, a Republican.

For prosecuting attorney, incumbent Christopher Wilson of Fulton, a Republican.

For county auditor, incumbent Karen Rentschler, of Fulton, a Republican.

For collector of revenue, Sarah Gladman, of Fulton, a Republican.

While filing for the April 3 municipal elections closed Jan. 16, there's still time for aspiring write-in candidates to file a declaration of intent with the county clerk's office. The deadline is 5 p.m. March 23.

However, due to a ballot measure passed in 2015, New Bloomfield won't be having an election this year.

Thanks to Senate Bill 593, passed in 2014, eligible cities may decide via ballot measure to skip municipal elections when the number of candidates who've filed are equal to the number of positions to be filled. New Bloomfield incumbents filed and are running unopposed for open seats for mayor, Greg Rehagen, and positions for Wards 1 and 2 on the Board of Aldermen, Gary Hoelscher and Rosemary Augustine.

The measure went into affect in 2016 and needs to be re-authorized every six years, according to information on the New Bloomfield municipal website.

"We're not able to take any write-in candidates for the New Bloomfield race," Hubbard explained. "There is actually no ballot for them."

New Bloomfield is the only city in Callaway County to have passed such a measure, she added.

Wednesday is the last day to register as a voter to vote in the April 3 election.

In January, the county clerk's office began the first part of a voter registration canvass that Missouri statute 115.163 requires every two years. According to Hubbard, this ensures voter information on file is correct and up-to-date.

Those registered to vote in Callaway County should soon receive new voter identification cards. Hubbard asks that voters review the information and make sure it's right. Anyone who's changed their name or moved will need to complete a new voter registration.