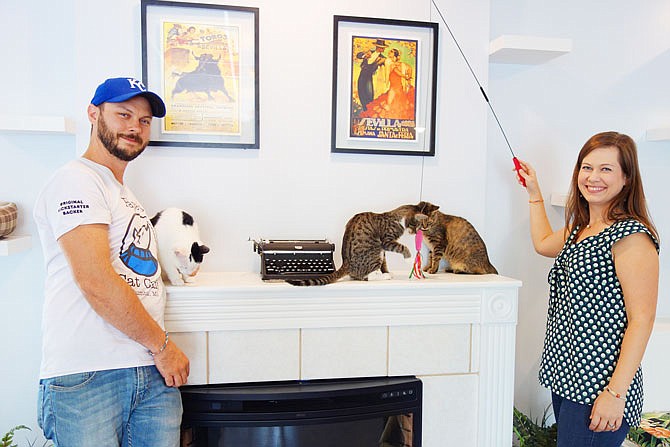 Ryan, left, and MacKenzie Kennedy plan to open Papa's Cat Café on Tuesday. The former English teachers were inspired by a cat café they visited in Korea.

COLUMBIA - Cats, caffeine and books are a classic combination.

Having all three at one café, however, is a little less common - especially in Mid-Missouri. On Tuesday, Papa's Cat Café will open its doors in Columbia, at 14 S. 2nd St., as the area's first cat café.

"Most major cities have them by now, and they're very successful," co-founder MacKenzie Everett-Kennedy said.

She and husband Ryan Kennedy first encountered a cat café in Seoul, South Korea, in 2016. The pair are former English teachers whose jobs often had them spending months at a time abroad.

Ryan said he grew up on a farm in Callaway County and loved having cats around. He is the self-professed cat person of the pair.

Ryan said he was enchanted by the idea of cuddlng cats while sipping a coffee. The Kennedys' 5-year-old daughter was enchanted too.

After visiting another thriving cat café stateside, the two realized the idea could be a hit in Mid-Missouri.

After a successful Kickstarter campaign and months of hard work, Papa's Cat Café is now taking reservations ahead of its debut. Reservations aren't always necessary, but because the cat room has a maximum capacity of 20 people - one for each cat - they're highly recommended.

"Just 24 hours after we opened up reservations, we already have 60 for our first week," MacKenzie said.

Here's how it works.

Papa's is divided into two main areas, separated by an airlock and on separate HVAC systems. Litter boxes are sealed away in a third, hidden room. The café is located in the first room and should be safe for those with cat allergies. Customers may purchase drinks, including coffee supplied by local roaster Fretboard. Or, they can bring their own beverage for a small corking fee.

"Our family spent a few months in Spain and almost every night, we'd go to a nearby café for churros dipped in chocolate sauce," Ryan added.

After picking up their goodies, customers can hang out in the café area and watch the cavorting cats through a large viewing window. Or, for an extra fee, customers can go join them. There are lint rollers and hand sanitizer on hand for easy clean-up afterward.

"It's like two separate businesses," MacKenzie said. "On this side, we're an eatery. On the other side, we're a Department of Agriculture-licensed animal rescue."

All 20 of the current cats come from Boone County Animal Care, a Columbia-area rescue focused solely on cats. All but two will be adoptable, Ryan said, with adoption forms available onsite or at papascatcafe.com.

"You need two permanent residents to teach the newcomers the ropes," he added.

Food and litter have been donated by generous companies.

"We had all 20 picked out, but a few got adopted," Kennedy said.

Even in a two-cat household, conflicts are likely to arise occasionally - cats have strong opinions and personalities. How do the Kennedys make peace among 20? With the help of three paid cat wranglers, of course. All three have backgrounds in animal care.

"We had super highly qualified people apply, and they've been working so hard," MacKenzie said.

The Kennedys have been as well; they camped overnight at the café as each batch of cats settled in.

It's hardly all work and no play, however. Spending time with the cats has already given them insight into all the delightful personality traits that will hopefully tempt customers into giving the cats new homes.

There's Barnacle, a formerly-feral orange tomcat who was too friendly to be re-released after being trapped and neutered. There's Mirage, a blind white cat with a neurological defect that makes her a little wobbly - but that doesn't stop her from chasing jingly toys.

There's Frankie, a hunk of a cat who likes giving love nibbles. And Sunshine, whose playfulness and good nature has tempted several shy fellow cats out of their shells.

"We joke that the place just needed a little Sunshine," Mackenzie said.

And that's just four of the cats people can meet and greet.

Papa's Cat Café gets its name from two sources.

The first influence is Ryan's daughter, who often calls him Papa.

The second one is Ernest Hemingway, the prominent American author often referred to lovingly as Papa. Aside from being one of Ryan's favorite authors to teach and read, he also famously loved cats. Many polydactyl cats - cats with a genetic mutation that causes them to have extra toes - are descended from Hemingway's kitties.

"He actually left his house to the cats," Ryan said.

Decor at Papa's reflects Hemingway's interests, such as Spain and big-game hunting, and is modeled on Hemingway's breezy Key West, Florida, home. In the cat room, shelves hold books by Hemingway and his peers.

"Columbia is a town of readers," MacKenzie said. "We hope to have a lot of events related to literacy."

Papa's also will host monthly learning times for children and a monthly book club, she said.

To learn more about upcoming events or book your first visit, go to papascatcafe.com.