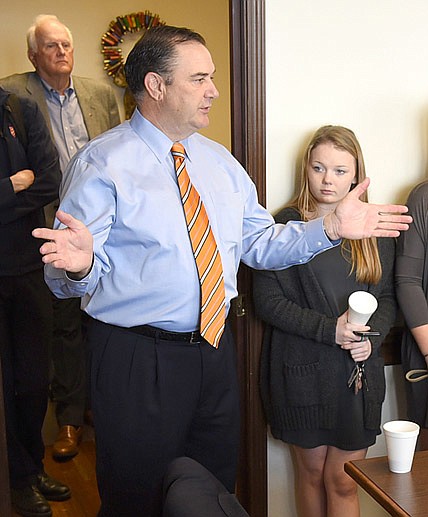 State Sen. Mike Kehoe thinks Missouri should have a week designated for bragging about Missouri-made products.

"The legislation is meant to piggy-back off the effort that you've seen recently, I'm sure, from Lt. Gov. (Mike) Parson, to promote Missouri businesses."

Last year, Parson's office launched a national "Buy Missouri!" advertising campaign to advocate for items made within the state's borders, and, according to ltgov.mo.gov/tourism-economic-development/buy-mo, "to promote to other states and the world the products, services, and businesses Missouri has to offer."

As Parson held events around the state, Kehoe said, "I was always amazed to find out what was made in Missouri.

"The more we can bring that awareness to folks when they go out and shop, maybe they'll make a decision to support that particular vendor."

Kehoe said the bill "is somewhat about marketing. The more you can mention, and get in front of people with this concept, the more they might start paying a little bit of attention to it."

"This bill shines a bright light on Missouri businesses," he said. "Whether we produce them, grow them, put them together, sell them here in the state of Missouri, I agree with what Sen. Kehoe said.

"I think this is a great marketing opportunity for the state of Missouri, to really show what we do in this state - which is a lot."

Also, Matt Panik, the Missouri Chamber of Commerce and Industry's vice president of Governmental Affairs, told the committee: "The Chamber is in a unique position, because we have over 100 local chambers of commerce that we can engage on this initiative, to get them to promote their local products, as well."

No one spoke against the proposal.

Kehoe reminded colleagues "that small business drives Missouri's economy, and formally encouraging Missourians, during one week a year, to make a conscious effort to support Missouri businesses is, I think, the right thing to do."