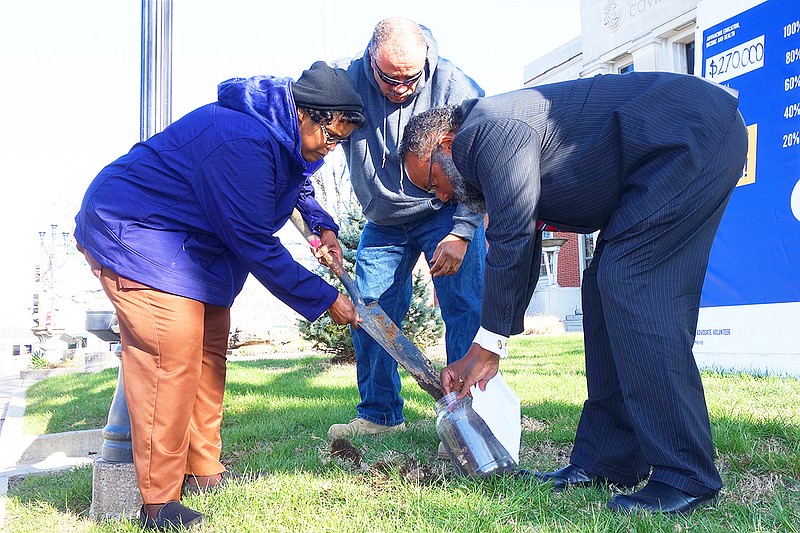 Anna Braxton (left), president of the Fulton chapter of the NAACP, NAACP member Webster Davis and Missouri NAACP president Nimrod Chapel dig up soil Saturday in front of the Callaway County Courthouse. The courthouse served as the site of the second hanging of Emmett Divers, an African-American man lynched in Fulton in 1895.

While the African-American man dangled from a telegraph pole in front of the Callaway County Courthouse, some 500 white men rode around on horses, whooping and hollering.

That's the scene Fulton NAACP member Webster Davis described to a solemn gathering last weekend. Representatives from the NAACP, Second Christian Church and Missourians for Alternatives to the Death Penalty memorialized Divers yards away from where his body was displayed more than 100 years ago.

"We're acknowledging our larger society's role in creating racial terror," MADP Executive Director Staci Pratt said. "I think we live with the marks of that."

Saturday's memorial was part of a series of similar memorials. Members of The Equal Justice Initiative, in partnership with organizations like Black Archives of Mid America, Missouri Faith Voices, NAACP and MADP, are collecting jars of soil from the sites of known lynchings across the nation.

These jars will be displayed at the New Legacy Museum in Montgomery, Alabama. The museum's opening is slated for April 26. Last Sunday, Oprah Winfrey reported on this museum and the collective effort on CBS' "60 Minutes" (to view: cbsn.ws/2IFqXUz).

Members of local groups said they hope to place memorial markers at the sites where lynching occurred.

"There's a sign for the Gray Ghost Trail," Pratt said, pointing. "Where's one for Emmett?"

Davis set the scene. In 1895, Divers had been accused of killing a white woman east of Fulton, despite being several miles away at the time of her death. Fearing angry locals would try to kill him before a trial could be held, law enforcement tried to transport him to St. Louis.

But an angry mob stopped them at the Caldwood Bridge over Auxvasse Creek. Police didn't resist as Divers was captured, Davis said.

"The white men tied him with rope and dragged him to the center of the bridge," he narrated.

Divers was pushed off and hanged until he died. Then the mob hauled his body up and brought it to Fulton, where they strung him up once more.

"They paraded him through the courthouse and across the square as a message," Davis said.

Contemporary news reports don't mention any arrests in connection with the lynching. That's typical among the 4,000-plus lynchings recorded after the Civil War - 60 in Missouri. Four took place in Callaway County.

"We have an urgent need to challenge the lack of recognition for lynching victims," Pratt said. "I think there's a tremendous sense of poisoned roots under this courthouse."

"My feet steady kickin' the wind, yeah, I'm close to being free," he said. "For the first time in my life, baby, white folks is lookin' up to me."