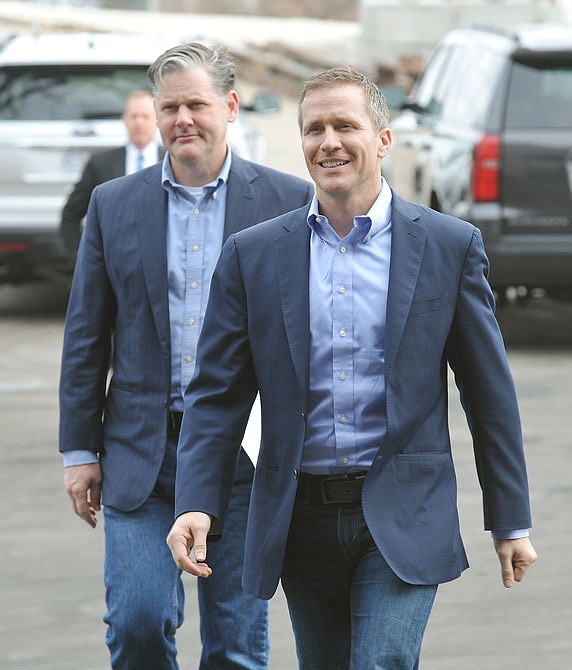 Erdmann - who started working for the state on Feb. 20 after working as a government planner for the Washington, D.C.-based McKinsey & Company consulting firm - is the governor's choice to be Missouri's first chief operating officer (COO).

Senate Majority Leader Mike Kehoe, R-Jefferson City, told the News Tribune, "If you look at this from strictly a business point of view - that's usually how most organizations would do it, whether a for-profit or a nonprofit.

"If they have an individual or an asset that's helping different departments of the organization, typically the costs of that resource would get spread over those departments."

Senate Appropriations Chairman Dan Brown, R-Rolla, said last week: "We have to decide, as a committee, to accept that (multi-department) breakdown, or do we say, 'It's all going to come out of the governor's (budget)?'

"We haven't come to a decision yet."

Appropriations Vice-Chair Ryan Silvey, R-Kansas City - and a former House Budget chairman - told the News Tribune last week: "I actually led the charge on finding those (jobs) in the Nixon administration that were spread across departments and consolidating those back into the governor's office. My position hasn't changed on that."

That April 2015 audit covered the governor's office operations from July 1, 2011, to June 30, 2014, and said 14 different state agencies paid for all or part of the salaries and travel costs for six employees.

"The records are there that show the money for expenses that we think were incurred by the governor's office were paid by Corrections, Agriculture, Economic Development and so on," then-Deputy Auditor Harry Otto said. "And it continues, even after some legislation was enacted which tried to deal with that (complaint) from the prior audit."

Silvey reminded a reporter: "We put language in the last several years of the budget that said you can't do that and - for transparency - we would like to see where the money is and who the person works for.

"So I think that if we look at the money they wanted to take from each department to pay him and we cut it from the admin of that department and we place it in the governor's office, that should solve everybody's problem."

Otto said two years ago that it's possible to make a case agencies should pay the costs of a governor's office employee whose work benefits that agency.

Silvey said last week, "I have no problem with that, but the way I would prefer to see it done is to take those costs from those departments and put them in the governor's office."

Silvey and Brown said lawmakers looking at Greitens' budget plan should consider the findings in the 2015 audit.

"We are definitely going to look at recommendations and changes to make government more appropriately responsive to the people," Brown said.

Kehoe acknowledged "(former Gov. Jay) Nixon did that with not only people but with assets sometimes, whether it was travel or etcetera."

In 2011, the Legislature's GOP leadership complained Nixon's administration had paid a number of its employees' salaries from different department budgets and billed many departments for his travel expenses.

"Let's just be honest and transparent," Stream said then. "What's he hiding?"

Officials said six years ago governors before Nixon also had billed departments for some employee salaries.

But lawmakers complained then that Nixon had expanded the practice, and it ensured the salaries were not listed on any one office's budget line.

Kehoe told the News Tribune last week he understood how the auditor's office might have a problem with that budgeting practice.

But, Kehoe added, he wants to give Greitens "a little bit of latitude to see how it's going to go. And then I'd like to work with members on the Appropriations Committee to see what their concerns are - if that way goes forward."

After announcing his plans for the COO post in January and later assigning Erdmann to it, Greitens office initially declined to say what the COO's salary would be.

The Springfield News-Leader has reported that Erdmann will be paid $125,000 a year.

Greitens' office didn't respond to a request for a comment for this story.