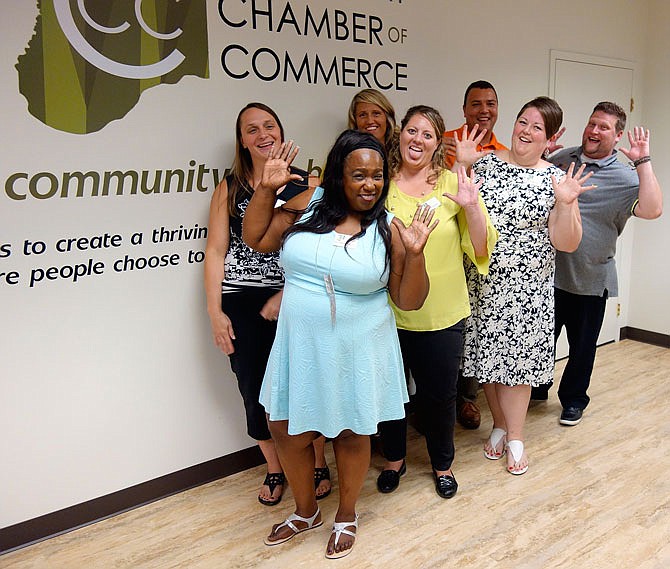 This is the newly announced Leadership Callaway Class of 2017, who met at the Callaway Chamber offices Thursday evening for their kickoff. They include, from left, Jennifer Smart, Cornellia Williams, Sara McDaniel, Kara Rhoades, Joe Coates, Stacy Maskey and Clifford Atterberry. (Not pictured: Allen Huggins.)

The 2017 Leadership Callaway County class was introduced at a gathering Thursday evening at the Callaway Chamber of Commerce.

Inspiring them onward was Marty Martin-Forman, consultant and former CEO of Fulton State Hospital, who went through the class some years ago.

"Fulton and Callaway County are truly places to be proud of," she told the new class members. "I think you will be amazed what you will learn."

Leadership Callaway County is a 10-month program offering participants a backstage pass to the workings within the county. The class focuses on and directly address strengths, challenges, needs and overall community issues. Sessions will cover topics such as health care, history, law, government and education. In addition, participants will learn about economic development and the opportunity to hear, see and meet the catalysts for growth in this region.

"Our goal is to develop future leaders of Callaway County," said Tamara Fitzpatrick, executive director of the Callaway Chamber of Commerce. "While participating, they will learn what type of leader they are and hopefully discover what their passion is for the community, whether it be in education, community outreach, economic development, etc.

"Once they graduate, we hope that they will find something in our community and start making a difference."

Clifford Atterberry said he's looking forward to the journey with his classmates.

"(I want) to learn more about the community behind the scenes, things I don't know about," he said.

Another class member is Joe Coates.

"I'm just excited about the opportunity to meet like-minded people, and to grow my professional career in Callaway County," he said.

This year's class reveal was planned by chamber staff and some of last year's alumni.

"This is what we want from our alumni: To find something that they want to engage in for betterment of our community," Fitzpatrick said.

Members of the new class include:

Clifford Atterberry: He was born and raised in Callaway County and graduated from Fulton High School in 1998. Shortly after high school, he struggled with addiction and made poor choices. In 2005, Atterberry decided he wanted more in life and began the road to recovery. In 2010, he started college and graduated from Columbia College in 2014. He has worked in the human services field more than six years at agencies such as Central Missouri Community Action and SERVE Inc. He has also volunteered through many organizations such as CASA, advisory council for Fulton HiSet, the Soup Kitchen and the Fulton Evening Rotary. He works at Central Region Workforce Investment Board and is stationed at the Fulton Job Center. He is responsible for the implementation of the Youth180 Program; which assist young adults ages 14-24 with employment and education goals.

Joe Coates III: He is from Jefferson City and is a graduate of Jefferson City High School. Coates, 33, received a full-ride scholarship to Lincoln University to play football and also received another scholarship as a member of Lincoln's Vocal Ensemble (the highest audition choir at the university). He is married with three children. He's the assistant branch manager of the Callaway Bank's main facility.

Allen Huggins: He is the safety and training manager at the Fulton Dollar General Distribution Center, where he's worked for 13 years. He is from Philadelphia, Pennsylvania, and lives in Columbia with his wife, Karen, and four children, ages 8, 10, 13 and 15. In his free time, he enjoys running and annually completing the St. Louis Half Marathon. He is active with his church and has been the Sunday school superintendent for several years. Huggins serves on the board of elders. He is also a Fulton Rotary member.

Stacy Maskey: She is the director of institutional research at William Woods University. Born and raised in Wellsville, Maskey credits her parents and the rest of her family with instilling the virtues and qualities that have made her who she is today. After graduating at the top of her class in high school, she attended Columbia College where she received a bachelor's and master's degree. She was an active member and officer of student government throughout high school and college and was a participant of Emerging Leaders Institute. She joined Columbia College as an institutional research associate in 2008. During her nine-year tenure, she served as a reporting analyst, systems analyst and project manager. She was an active member of Girls in Tech, Women's Network and Emerging Professionals In Columbia. She attained her Project Management Professional certification in 2016. Maskey joined William Woods University in March.

Sara McDaniel: She is the CEO of the YMCA of Callaway County. She's been with the YMCA for 10 years. For the first seven years, McDaniel served as program director. Working at the YMCA allows her to interact with people of all ages and the opportunity to be active. She also coaches swimming for the YMCA and the Fulton Fins swim teams. McDaniel graduated North Callaway High School in 1999 and attended Truman State University in Kirksville. She was a member of the Truman swim team that won Division II nationals three years. In June 2005, she married John McDaniel and lives in Fulton with their two children, Mackenzie, 9, and Chase, 7. McDaniel likes spending time with her family, watching her kids participate in sports, spending weekends at the lake, camping and MU football.

Kara Rhoades: She is currently a records management system supervisor for Ameren Missouri at the Callaway Energy Center. Prior to taking this position in 2015, she was a nuclear clerk for three years. Before her employment with Ameren Missouri, she worked for the Missouri Division of Professional Registration, State Board of Cosmetology and Barber Examiners for 12 years. Rhoades is a life-long resident of Callaway County. She lives with her husband, Johnny, and their three children south of Fulton. They enjoy trail riding and spending time together as a family.

Jennifer Smart: She is a 34-year-old wife and mother of two daughters: Annabelle, 7, and Marabel, 2. She is the middle child of nine, and she said coming from a large family has helped shape her. Smart attended South Callaway school until seventh grade, and then attended Jefferson City Public Schools where she graduated in 2002. Smart attended State Fair Community College where she received an associate's degree in computer information systems with an emphasis on accounting. In 2004, she married her husband, Shawn. They live in Tebbetts, where they raise cattle. She works at Callaway Electric Cooperative where she serves as office supervisor over six customer service representatives. She is also enrolled in online classes at Central Methodist University and will graduate with a four-year degree in December 2018.

Cornellia Williams: She is the functional leader for the Jefferson City and Fulton MoJob Center. She was born and raised in Columbia. Williams lived in public housing and was a high school dropout but earned her GED in 1988. She has two sons. Williams has three college degrees from Columbia College. She is a member of the City of Columbia Citizen Police Review Board, COMO CHDO low-income home building program and Chamber of Commerce Leadership 2011 graduate. She worked for Columbia Housing Authority for nine years. Williams taught the Money Smart Finance Program for Columbia. She created a job training program funded by Columbia named the REWARD Program, which placed 150 adults in job training positions. She successfully created a back-to-school program and facilitated it for more than six years. School supplies were given to 10,000 children, and the Columbia mayor named a day after her in honor of her efforts.