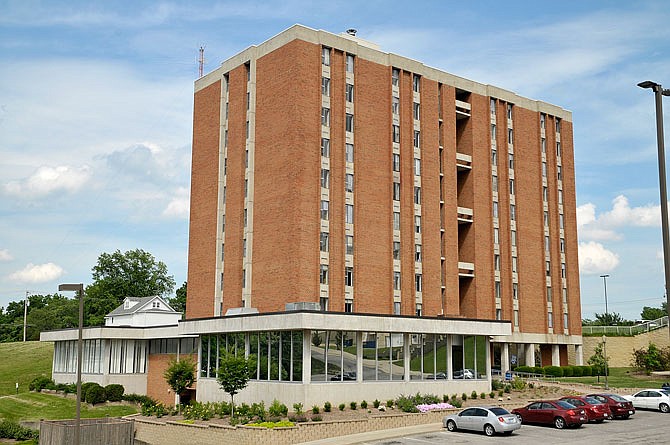 Higher counts of a common airborne mold have been found in a few rooms in Lincoln University's Dawson Hall, located near Page Library.

Lincoln University officials are working with state health officials to see what they need to do next, after an outside testing firm found five rooms in the Dawson Residence Hall with substantially elevated levels of penicillium/aspergillus, described as "a common mold" often found both outdoors and indoors.

"There are no EPA standards that suggest anything that we have to do," LU spokeswoman Misty Young told the News Tribune on Monday afternoon. "So the university is going to clean those areas in the rooms - and that is all that we have to do."

Four of the five Dawson Hall rooms with high mold counts were on the sixth floor, while the fifth room was on the fourth floor.

The highest level of the penicillium/aspergillus was 6,492 spores per cubic meter, and a nearby sixth floor room had 4,563.

Lincoln hasn't pinpointed a specific source of the problem in those rooms, Young said, adding: "We wouldn't want to wage a guess right now.

"The Department of Health has told us it's moisture (and) we are going to work with the department, so we can determine where the moisture is coming from."

Some have suggested that multiple bathrooms in a residence hall could be a source of the problem.

But, Young said, that's not the case with the Dawson Hall mold.

"These are actually in their sleeping rooms," she said. "Dawson Hall has the shared bathroom facilities" that were common in college dormitories built in the 1950s, '60s and '70s.

"There aren't bathrooms in the rooms."

While providing the test results for 22 rooms, the Dawson Hall "front yard" and the front of the building, the Inspector Lab report cautioned: "EPA regulations or standards for airborne or surface mold concentrations have not been established.

"There are also no EPA regulations or standards for evaluating health effects due to mold exposure."

The two reports from the Inspector Lab of Fort Lauderdale, Florida, noted the penicillium/aspergillus mold is "extremely common in indoor air," and that its indoor habitat most often is "wetted wood and gypsum wallboard paper, textiles (and) leather."

Outdoors, the mold most likely is found in soil and decaying vegetation, textiles and fruits - "and are a normal part of outside air."

The biggest allergy potential, the reports said, is for hay fever and asthma.

There also is a "disease potential," the Inspector Lab report explained.

The penicillium/aspergillus mold is an "opportunistic pathogen in immunocompromised persons" - but it is "not normally a pathogen in healthy individuals."

Young said administrators had received no reports of serious illnesses, and no LU students had reported to the school's health center for treatment.

And, as far as she knows, no student was hospitalized.

"Of course, with our students being adults, they can go off-campus if they want to, to seek treatment," Young explained.

When the mold problem first was reported to LU officials just over a week ago, the school moved approximately 15 students from Dawson Hall another, unidentified, facility.

The original LU statement said the complaints were "contained to one floor and one wing" of Dawson Hall.

The mold testing eventually was done in rooms on four different floors.

A later statement last week said affected students would be given the choice to remain in their new rooms or return to Dawson Hall.

Young said Monday she didn't know if any of the students had made a choice, yet.

An LU student's mother told the News Tribune last week there was "black mold" in the heating-and-cooling vent system.

Young said no specific "black" mold had been found - and pointed to the state health department's webpage, health.mo.gov/living/environment/indoorair/mold.php, which reports "no conclusive scientific evidence linking the inhalation of black mold spores or any type of mold in the indoor environment to any illness other than allergy symptoms."