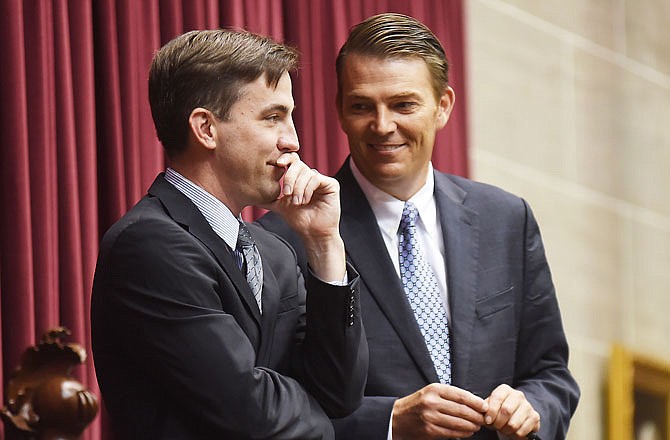 The sweeping guns legislation would allow most adults to carry concealed weapons without needing a permit while also expanding people's right to defend themselves both in public and private places. The elections law change would require people to show a government-issued photo ID at the polls starting in 2017, if voters also approve a proposed constitutional amendment on the November ballot.

Both measures passed with more than the required two-thirds majority in each chamber as Republicans shut off Democratic discussion and enacted the laws on largely party-line votes.

The Republican supermajorities added to Nixon's record as the most overridden governor in Missouri history, a distinction made possible by an era of extreme political division in the Capitol. Heading into Wednesday, lawmakers had successfully overridden Nixon on 83 bills and budget expenditures over his two terms in office - nearly four times more overrides than the combined total for all other governors dating back to 1820 when Missouri was still a territory.

Among the additional bills overridden Wednesday is one charging fees ranging from $5 to $20 to Medicaid patients who repeatedly miss doctors' appointments. But it's uncertain whether that law actually can take effect, because a spokeswoman for the Centers for Medicare and Medicaid Services says federal regulations don't allow such fees.

The guns legislation prompted some of the most intense debate Wednesday.

Democrats asserted it could put racial minorities at a greater risk of being fatally shot.

"The targets in our area are black boys, not pheasants," said Sen. Maria Chappelle-Nadal, who represents Ferguson, where sometimes violent protests broke out after the fatal police shooting of black 18-year-old Michael Brown in 2014. The white officer was cleared of wrongdoing by state and federal investigations.

"What I don't want to get to is the point where there is a trigger-happy police officer or bad Samaritan like Zimmerman who says, 'Black boy in the hood. Skittles. Let's shoot,'" Chappelle-Nadal said, a reference to Trayvon Martin, a black 17-year-old who was walking back from a Florida convenience store after buying ice tea and Skittles when he was fatally shot by neighborhood watch volunteer George Zimmerman in 2012.

Republicans said such fears of greater gun violence are misguided.

"The basis of this whole bill is that it allows law-abiding citizens to protect themselves and their families," Republican sponsor Sen. Brian Munzlinger said.

The override vote means Missouri will join 10 other states with laws that allow most people to carry concealed guns even if they haven't gone through the training required for permits, according to the National Rifle Association, which supported the legislation.

The measure, described by supporters as "constitutional carry," allows people to carry hidden guns anywhere they can currently carry weapons openly, effective Jan. 1. People who choose to still get a concealed-carry permit could potentially carry their weapons into places off-limits to others and could take them to states with reciprocal agreements.

The legislation also would create a "stand-your-ground" right, meaning people don't have a duty to retreat from danger any place they are legally entitled to be present. The NRA says 30 states have laws or court precedents stating people have no duty to retreat from a threat anywhere they are lawfully present. But Missouri's measure makes it the first new "stand-your-ground" state since 2011.

It also expands the "castle doctrine" by allowing invited guests such as baby sitters to use deadly force if confronted in homes.

Missouri's photo ID measure was opposed by the state NAACP, AARP and other advocates for minorities and the elderly. In a letter explaining his veto, Nixon said the measure would "disproportionately" impact senior citizens, people with disabilities and others who have been lawfully voting but don't have the government-issued photo ID required under the bill.

But the Missouri measure contains several exceptions supporters hope will help it fare better in prospective court challenges than voter ID laws in some other states. If Missouri voters swear they don't have photo IDs, they would still be allowed to vote by showing other forms of identification. The bill also requires the state to pay for photo IDs for those lacking them, as well as for any underlying documents such as birth certificates and marriage licenses needed to get a state identification card. And if the state budget doesn't include money for such costs, the ID requirement would not take effect.

Even then, the requirements wouldn't take effect unless voters this November approve a proposed constitutional amendment, which is needed because the Missouri Supreme Court struck down a previous photo ID law in 2006 as unconstitutional.

Democratic Rep. Stacey Newman countered: "This bill is voter fraud on its face."