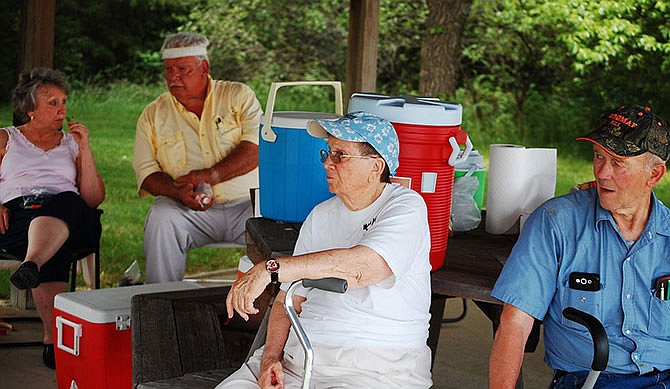 Gene Meador at a Callaway Amateur Radio League (CARL) event, taking a break from radio operations. The organization will be setting up at Westminster College this weekend for its quinquennial Special Event Station, which celebrates the anniversary of Winston Churchill's "Iron Curtain" speech. Meador marched in the Fulton High School Band that welcomed Churchill to Fulton 70 years ago this Saturday.

The Callaway Amateur Radio League LLC (CARL) will commemorate the 70th anniversary of Winston Churchill's "Iron Curtain" speech, which was delivered at Westminster College in Fulton on March 5, 1946, by sponsoring a Special Event Station where they will be operating their radios throughout the weekend.

The event, which occurs every five years on the anniversary of the speech, has its own call-sign - W0C (W Zero C) - authorized by the FCC, which was chosen by CARL to remember Churchill and Westminster College.

Why is an amateur radio club inspired to take on these remembrances?

Long-time member Gene Meador (WB0HKN) marched with the Fulton High School Band during the parade welcoming Churchill and President Truman on that historic day, and that connection resonated with her fellow CARL members.

"We didn't realize how much influence it would have around the world," said Meador, who was a 17-year-old senior at the time and recalled the day as a nice one, though a bit cool. "I think there was more publicity after the speech, it made more of a headline afterward, because so much of what he said came true."

Meador said she didn't get to hear the the famous orator because of the "hubbub" that surrounded the event, but she said the parade was well attended for Fulton. She said there were rumors it was so packed people were walking in from Kingdom City.

"That wasn't true," she said. "But we were excited to have him here, and we were also excited that President Truman was coming because he was from Missouri."

Meador said that she has been a member of CARL for 27 years, but had studied for her operator's license when she was a younger woman teaching at Riverview Elementary. She said she has always enjoyed hobbies that were mechanical in nature because of her experiences growing up.

"I worked in my father's garage as a girl, because he couldn't get help during the war," said Meador. "So I was always more interested in those things than in cooking and cleaning."

Meador, now 87 and still as interested in mechanical gadgets as ever, said she hopes to attend this year's CARL event, but her attendance will depend on the weather.

The CARL members, who will be joined by other amateur radio operators from the area, will start setting up at 3 p.m. and will be transmitting from 5-8 p.m. today. They will continue their event from 8 a.m.-8 p.m. on Saturday and 8 a.m.-3 p.m. Sunday.

Temporary antennas will be set up outside Newnham Hall on the south end of the campus, where two-way radio contacts will be made with several different modes including Voice, Data, and CW (Morse Code). CARL member Dick Thompson (K2HT) will provide World War II era Morse Code Keys for use during the weekend.

Amateur radio stations that are not part of the campus event but make contact with W0C, will be able to request a certificate or postcard commemorating the Special Event Station. More than 500 amateur radio contacts were made across the U.S. and around the world during the anniversary five years ago.

"Sponsoring this event is a way for us to connect with local history and use our hobby to promote Fulton," said David Mueller of CARL.

Mueller also said that the event gives the club the opportunity to practice skills they would need should they ever be called to operate during an emergency operation.