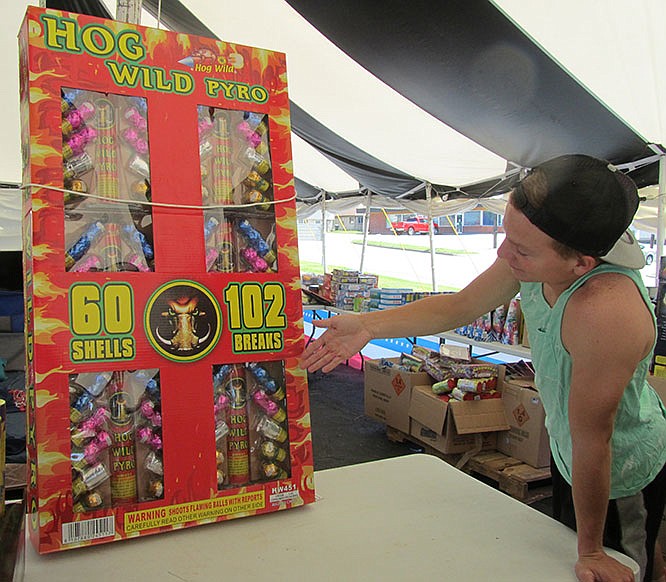 Dax Helsel of Real Deal Fireworks talks about fireworks. This product is the most expensive at the fireworks stand valued at $220.

As Callaway County sets its sights to the sky for the Fourth of July, firework businesses and local authorities play a key role in the holiday.

"It's a lot of fun. You get to spend time with your family and have excitement for the night," said Dax Helsel of Real Deal Fireworks at his stand in Fulton.

The Helsel firework business has stands located throughout Missouri, including Branson, Jefferson City and Springfield.

"We'll occasionally have some friends come in and help us," Helsel added about the family-owned business.

The price range of fireworks at the Real Deal Fireworks stand, located near the downtown Fulton roundabout, is $1 to $220, he said. Among the fireworks that are sold at the stand, artillery shells are popular.

"They make big, pretty explosions up in the air," Helsel said.

With many fireworks on display, people could be confused about which to buy.

"A lot of people like to look at the outside of the box," Helsel said, adding that the products' designs help influence decision-making.

Helsel said that business is slow in June but sales typically ramp up during the first week of July. Prices can be negotiated, he added, and if multiple products are purchased, the business may add a free item to one's purchase. In addition, Ameren and state workers receive a 10-percent discount if they show their employee identification card.

Helsel encourages families to celebrate Independence Day, but he encourages people to be safe.

"You're able to show your independence with fireworks," he said.

"We encourage parents to act responsibly and watch their children as they are shooting fireworks for the Fourth of July," he said.

The Fulton Fire Department also provided a list from the U.S. Consumer Product Safety Commission. The list can be found at www.cpsc.gov/Safety-Education/Safety-Education-Centers/Fireworks/.

"You have no idea where it's going to land," he said. "It's a recipe for disaster. I would refrain from purchasing and using these at all. We want to be able to have fun, but we want people to be safe."

If people have an emergency, they should call 911, he added.

A free fireworks display will be at 8:45 p.m. July 4 at the Fulton Country Club.