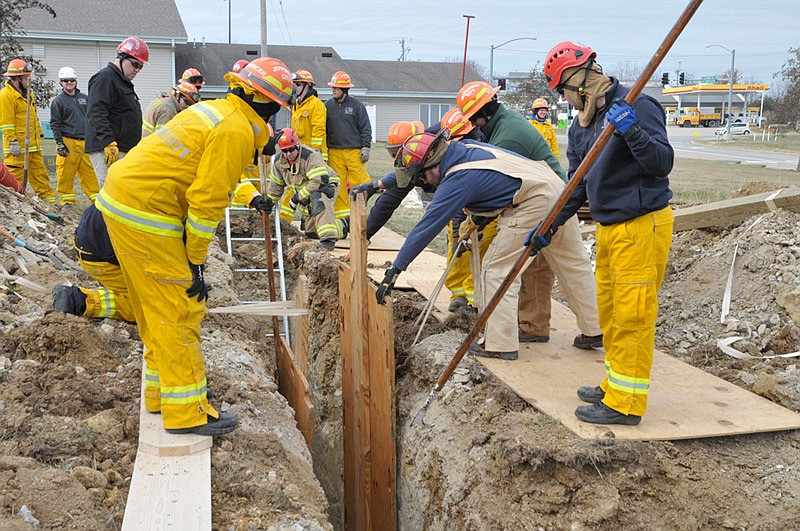 This week, the Jefferson City Council will begin discussions on the draft 2017 budget, which will be presented by Mayor Carrie Tergin at a meeting Monday.

So what can be expected for next year?

"I do expect growth, and I would say this is a positive budget," Tergin said.

City officials calculate revenue projections based on past actual receipts, averaged over a period of two to five years. Finance Director Margie Mueller said the exact formula depends on the revenue category so she can ensure projections are in line with reality.

"There is not just one average we picked or one method that I used; I used the method that made sense for that line," Mueller said.

One reason revenue is trending upward, other than actual increased collections, is the way the city averages its projections. For sales tax, Mueller takes the past three years of actual receipts to calculate a projection and the city is just starting to move past one particularly bad year. In 2013, the city had a mid-year budget shortfall, and that negative year is just starting to fall off the formula that calculates the average for sales tax revenue projections.

"Those years where it was actually in decline are falling off now," Mueller said.

Mueller noted the city ended the 2015 fiscal year with a 7.46 percent increase in sales tax revenue and that same line had increased 4.62 percent the year before.

The draft budget includes about $436,000 set aside, which will be used by the council to implement recommendations of the city's comprehensive classification and compensation study, which is currently being done by Kansas-based Austin Peters Group. The group is expected to deliver results by mid-October, which city officials are hoping will provide enough time to use the information in the 2017 budget.

The mayor's draft budget includes several newly funded positions, but some of those are not exactly new.

The draft budget includes two new positions in the Police Department: a police information manager and a police officer I. Both positions were requested by the department last year, but were not funded in the current budget. Chief Roger Schroeder said both positions, or at least some version of them, had existed in the department before the budget shortfall in 2013. He noted the department had a records section supervisory position eliminated in 2013 and the police information manager is a similar position with the title change reflecting evolving technology.

The Fire Department has two entry-level firefighters in the draft budget, positions that existed before 2013 and have been requested by the department ever since. In the past two years, the department has unsuccessfully gone after grants that would fund those positions and noted that both positions are needed to fulfill obligations in the firefighters' union contract. There is a clause in the contract about keeping the workforce at a certain level of personnel per shift, which Fire Chief Matt Schofield has said is difficult to maintain without the two added firefighters.

The Public Works Department has a design engineer (civil engineer II) and a street worker position in the draft budget, two more positions that had existed before the 2013 cuts and have been requested by the department ever since. Public Works currently has only one design engineer in what used to be a four-person division, which can cause delays in projects that are designed in-house.

And two street worker positions were cut in 2013, right when the department was actually considering requesting additional street staff. The street division has not grown in more than 50 years, even as the city expands its limits and becomes responsible for more miles of road. In fact, the loss of positions since 2013 shrank the street division staff even lower than it was in 1953, when the city was responsible for 9.14 square miles of land, compared to more than 37 square miles of land now.

The Planning and Protective Services Department has a new administrative technician, as well as a part-time plan review and technical office support position, both of which are new to the department. Department Director Janice McMillan said the part-time plan review position is a result of staff developing a long-range plan for the building division. She said the position of plan reviewer was identified as important to improving the division's function, noting it would remove those duties from the building official, who has other responsibilities.

"Builders, developers and owners expect a reasonable turnaround time (as do we) which can be difficult when there are many competing duties and issues, especially when these reviews take concentration and 'quiet time' to complete," McMillan said.

She also noted the city currently takes about three to four weeks to turn around a plan review, while Columbia's turnaround time is closer to 10 days because of dedicated plan reviewers.

Tergin's budget didn't change too much of the one presented to her by City Administrator Steve Crowell, which she said indicates how closely staff and council has worked to align priorities and have them reflected in the draft budget. But the one thing Tergin did point to was increased funding for the old Missouri State Penitentiary.

Last year, Tergin had proposed using $15,000 in general revenue funds for improvements to MSP, including new or additional lighting in Housing Unit 1, 3 and 4. The council ultimately decided to fund those improvements from the half-cent capital improvement sales tax instead.

"Now that we're actually doing something at MSP I wanted to make sure that was in there," Tergin said, referencing the July 2 Travis Tritt concert held at the prison. "Who would've thought one year ago that we would actually be having an event there with 2,000 people?

Tergin said she plans to speak with the Jefferson City Convention and Visitor's Bureau about matching the $20,000 in city funds, as the organization did last year with the city's $15,000. She also said they are continuing conversations with the state about how to continue using the prison as a venue for concerts and other events.

"It was something that I know we'll do again," Tergin said.

The draft budget includes funds to purchase five new black and white police vehicles, something Tergin said she is happy to see.

Last year, Tergin said she was unhappy with the number of leased vehicles in her draft budget, which the City Council ultimately removed, citing a preference for outright purchases.

"I found that things that we learned from the last budget are reflected positively in this budget," Tergin said.

Also funded is the purchase of one unmarked police vehicle ($28,251) and two police motorcycles. There also is $300,000 set aside as a reserve for facility needs, which Mueller said would be used for building repairs and maintenance as issues arise.

A couple of items that were not funded in the mayor's draft budget include design costs to move municipal court into the City Hall Annex, where the Parks, Recreation and Forestry Department operates.

Once the department's planned Wellness Center opens on Lafayette Street, at least a portion of the staff is expected to move into the new facility, and city officials have told the department they'd like to have the annex area for municipal court, currently housed in the council chambers in City Hall.

But construction on the Wellness Center is not expected to be complete until the end of January, and Tergin said it made sense to give it time to see how the staff moves work. Crowell also noted the money to complete that design work (estimated to be about $15,000) could come from other funds.

Another unfunded item is just under $600,000 for implementation of the Capitol Avenue revitalization plan. Tergin said that's not funded only because the city needs to first see the results of the blight study, currently underway, and look at legal options moving forward.

Jefferson City starts its budget meetings at 5:30 p.m. Monday at City Hall. Meetings are open to the public, live streamed on the city's YouTube page and broadcast on the JCTV cable channel.

On Monday night, Mayor Carrie Tergin will present her draft budget to the Jefferson City Council and the public. The draft 2017 budget includes roughly $32.2 million of general fund revenue and expenses. Here are some highlights of what's included in Tergin's draft:

Funding for improvements to the old Missouri State Penitentiary:     $20,000 (could be matched by the Jefferson City Convention and Visitors Bureau)

Funding to implement recommendations of salary study, currently being done:    $436,280

Mayor Carrie Tergin's draft budget for 2017 includes funding several positions, but not all of them are actually new. Take a look at the positions included and whether it's a new position or a return of one cut in past years.

Police: Information manager, $55,301 - Similar position was lost in 2013 cuts, has previously been requested by department.

Police: Police officer I, $53,809 - Similar position was lost in 2013 cuts, has previously been requested by department.

Fire: Entry level firefighter, $63,373 - Position was lost in 2013 cuts, has been requested by department ever since.

Fire: Entry level firefighter, $63,373 - Position was lost in 2013 cuts, has been requested by department ever since.

Public Works: Civil engineer II (Design), $87,069 - Position was lost in 2013 cuts, has been requested by department ever since

Public Works: Street worker, $42,885 - Position was lost in 2013 cuts, has been requested by department ever since.

Human Resources: Part-time position (existing, not fully funded), $4,018 - Existing position that has not been fully-funded in the past two years.