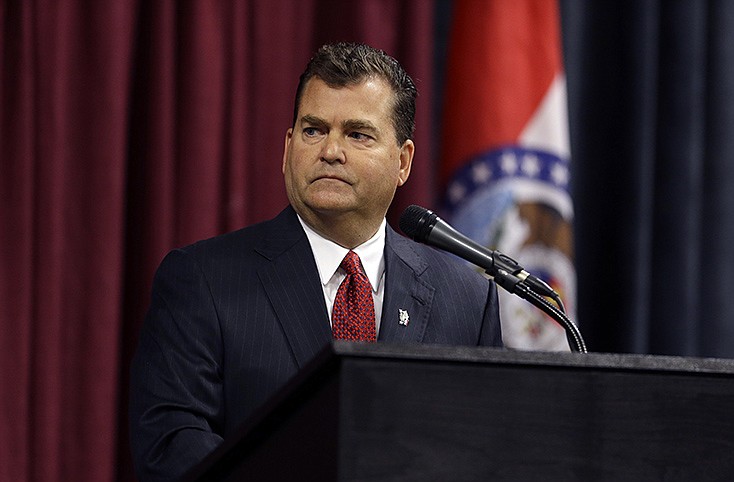 Republican Dave Spence takes part in a 2012 debate between candidates for Missouri governor.

A panel tasked with recommending changes for the embattled University of Missouri System got its start Friday by outlining priorities to focus on, such as governance and diversity.
The eight-member University of Missouri Review Commission met at the Capitol for the first time to grapple with how to help the system, which has faced turmoil in the wake of last fall's protests on the Columbia campus over racial issues.
The group will split off in pairs to focus on four topics for review: degree programs and workforce readiness, governance, diversity and extension programs and distance learning. Members discussed cutting back on unsuccessful programs, the governing board's diminished freedom in dealing with finances and how the unrest could have been handled differently. Members face a Dec. 31 deadline to recommend changes.
Former system president Gary Forsee said it might have helped to have professors talk up MU to local high schools in December, for example.
The panel got to work despite lack of funding, as Gov. Jay Nixon cut that money earlier this month in what he said was an attempt to balance the budget. House and Senate administrators told members they'll still be reimbursed for travel and other expenses.
Lawmakers who were frustrated with how protests were handled and what some described as lack of leadership created the commission. Demonstrations culminated in November with the resignations of the system president and Columbia chancellor.
The panel faced criticism even before its first meeting. House Minority Leader Jake Hummel previously said the Republican House speaker and Senate president pro tem's choices for members appeared geared toward a "Republican political agenda."
Members include Dave Spence, who ran as a Republican against Nixon in 2012, and Columbia conservative radio host Renee Hulshof.
Jeanne Sinquefield, the newly elected chairwoman of the commission, and others said the aim is not to be political. Sinquefield, along with her husband, conservative mega donor Rex Sinquefield, have donated millions of dollars to the university.
"We want to restore the roar at Mizzou with politics left behind," Spence said.
The next meeting is set for Aug. 24 in Columbia.