Nuns on the Bus making rounds 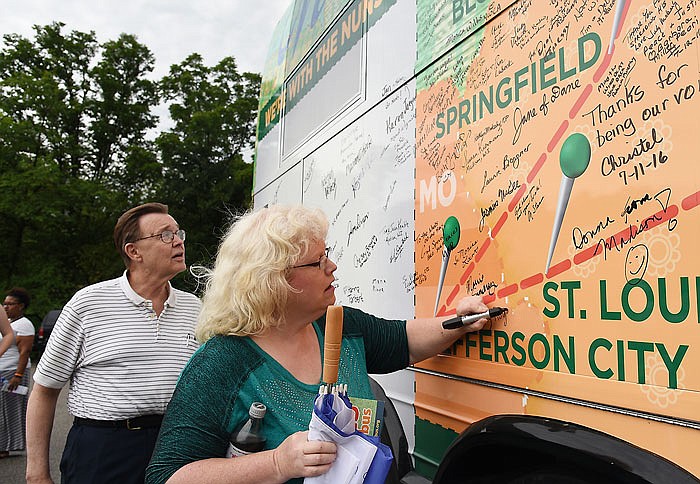 Wayne Lee waits his turn while Amy Rogers signs her name around Jefferson City on the map decorating a bus. Rogers is active in Faith Voices in Jefferson City, and Lee is a disability advocate; both were at Central Missouri Community Action to hear Sister Simone Campbell with Network's Nuns on the Bus.

Nearly 20 Catholic nuns traveling together by bus stopped in Jefferson City on Wednesday, advocating for social and economic change.

Nuns on the Bus, a project of Network, a national advocacy organization led by nuns, stopped in Missouri's Capitol during day two of its 23-city tour in 13 states.

The project started in 2012 after the Vatican criticized Catholic sisters and labeled the organization as a bad influence for "working too much" on poverty issues, said Sister Simone Campbell, founder of Nuns on the Bus. She said Network used the notoriety to further its mission, resulting in Nuns on the Bus.

"Since then, whenever a serious political movement is happening, we think the bus needs to be brought out again to try and stir up our people and make a difference," she said.

Every year, the Nuns on the Bus tour has a different theme to make a statement about the current political climate. This year's theme, "Mend the Gap," is reflective of several national topics, including income inequality, healthcare inaccessibility in non-Medicaid expansion states and political polarization among Americans.

"This election season is so painful, especially when we hear the stories of people who are left out of our society, left out of our economy and who feel are pushed out," Campbell said.

At each city, the nuns meet with individuals to hear "the reality on the ground," Campbell said. Their first stop in Jefferson City was the Central Missouri Community Action (CMCA) office. There, Campbell facilitated a discussion touching on struggles of the poor and what resources were lacking in Jefferson City, such as public transportation and good paying jobs.

Nuns on the Bus collects these stories and shares them with political leaders in Washington, D.C.

"It's all about collecting the realities of our different states to bring to the conventions and say, 'We can come together. We can solves these problems. We don't have to be angry and fearful of each other,'" Campbell said.

The nuns will talk about people they've met along the way, including Angela Whitman of Jefferson City.

During a group discussion, Whitman shared her struggles living in public housing, where she sees poverty, child hunger and drug activity firsthand. Whitman said she does what she can to address issues in her community, including staying in contact with city and law enforcement officials, but the fight can be overwhelming.

The nuns provided her with a sense of comfort.

"Did I learn something? I learned a lot today," she said. "I learned that I'm not in this by myself. Even though, physically, I may not see anybody standing next to me, but there is somebody fighting for me. So, it means a lot. It means a lot."

At Quinn Chapel A.M.E. Church, Nuns on the Bus facilitated group conversations about the needs of the local community among other politically-charged topics.

Though Nuns of the Bus has more in common with the Democratic platform, it is non-partisan. Campbell said the organization is "an equal opportunity annoyer," persistently contacting the White House about immigration policy and Republicans on their tax and social safety net policies.

With their arguments, the nuns utilized the knowledge they've garnered through their bus tours.

"Nuns are trustworthy reporters of facts on the ground, and we also have the capacity to listen to stories of people we meet and to share them," she said.

"So, I say we are exercisers of holy curiosity and sacred gossip, and that makes the bus a compelling event to make change."