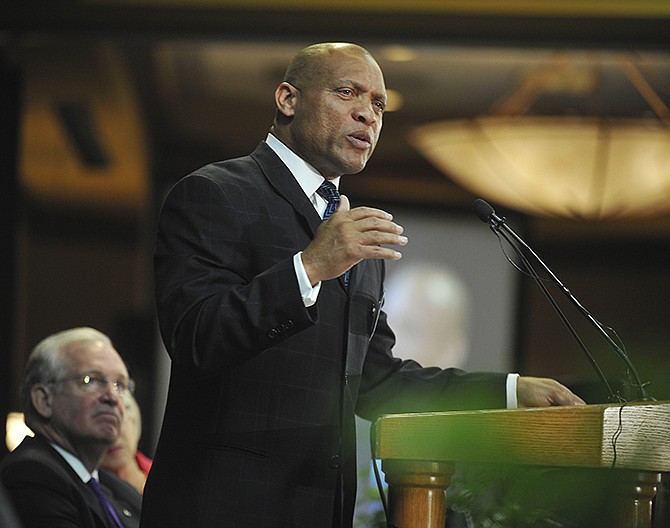 And working toward unity when people have different views and opinions is one of those challenges.

"That's the Constitution of the United States," he said, "that you would be able to share your opinion, we would be able to listen - and then collectively come together to resolve whatever conflict we're currently dealing with."

Williams is senior pastor of the Spirit Church in Ferguson, which he and his wife, Tracy, founded in 2007.

But he came to St. Louis in 2001, when he signed with pro football's Rams after playing a decade with the Arizona Cardinals.

His 14-year career included one Super Bowl appearance (when the Rams lost to New England), eight Pro Bowl games and four All-Pro selections. He was inducted into football's Hall of Fame in 2014.

But, he said, he almost didn't get those honors because, when the Cardinals changed coaches in 1994, he didn't want to go back to Arizona.

"Because of fear, I almost missed the opportunity," he explained. "But when Tracy and I prayed, we determined it was God's will to go back to Arizona.

"And that was the first year that I made All-Pro and made the Pro Bowl. I led the league in interceptions - because of a decision" to overcome fear.

The New Orleans native said his parents sent him and his two brothers to church even though the parents didn't go.

"I wanted to know, "What's this church stuff all about?'" he recalled Thursday morning. "I couldn't see God, and I didn't like the people who were there. ... I thought church was a place you go after sitting six days. I thought you go on the seventh day to empty your sin-bucket - and then go back out and get it done again.

"I didn't understand how God related to everyday life."

During his junior year at Southern University, Williams joined the football team as a walk-on and made a personal commitment to be a Christian.

"I found out how God speaks to people - he changes your heart," Williams noted. "I found out my gifting is the ability to communicate and make difficult things simple to no matter who heard me speak."

Part of his message was there are no shortcuts and no easy answers.

But, he also said, "Our generation will change this - whatever it is.

"We will come together and figure out how to move this country forward, so when we finish, we can hand the baton off" to the college youth of today.

"God always thinks multi-generational - he's never been a God who thought only for one generation," Williams said.

He asked why so many people around the world will endure hardships to get to the United States.

And he pointed to his parents as an example of the answer - his father was the youngest of nine children and the first in his family to go to college.

"I know how one man or one woman can change the trajectory of one generation and multiple generations," Williams said. "We stand on the shoulders of people who made decisions years ago."

And in this country, he said: "Many of the things in the tenets and values of the state of the United States had a lot to do with the Founding Fathers believing that there was a God that existed - and a lot of believing that the God that is existing, that his son was Jesus Christ."

But, he told reporters at a news conference after the breakfast, his message of faith and trust in God isn't just for Christians.

"That's what makes the United States great," he explained, "freedom of religion and freedom of expression.

"God created us with free wills, where we get an opportunity to decide. ... It's a message geared toward "let's continue to make the decisions that made this (great) country what it is.'"