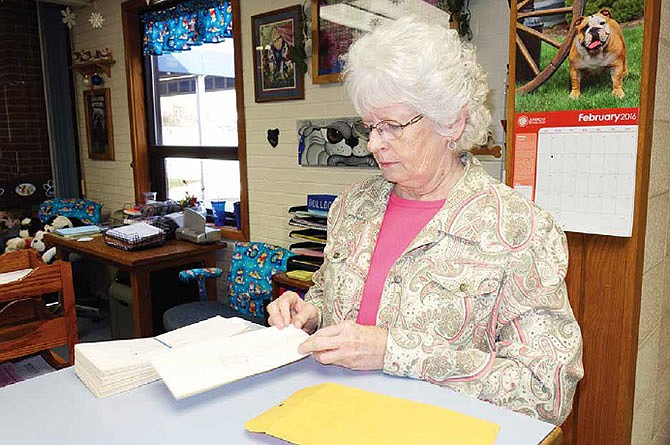 Office secretary Linda Mealy, at the South Callaway Middle School, prepares to send a letter written more than 20 years ago to the person who wrote it. The stack of letters from a 1993 English assignment were uncovered about six years ago and are now being returned to their proper owners.

MOKANE, Mo. - Members of the 1993 graduating class at South Callaway are getting their seventh-grade letters 23 years after being written.

Between five and six years ago, a stack of yellow envelopes addressed in seventh-grade scrawl were found hiding in a desk. An assignment from former English teacher Kit Glover, the letters had been misplaced. Now, middle school principal Gary Bonsall is reaching out to find the former students and return their letters.

School secretary Linda Mealy stored the letters in the vault once they were found with the intention to find a way to get them back to their owners and now are coming out of the dark. Bonsall agreed that returning the letters was the right move and approved a post for the district's Facebook page.

"It would be neat to get them out to owners, but figuring out how to do that after 30 years would be a trick," Bonsall said.

Bonsall hopes students in the class share the news of the letters with their former schoolmates if they have kept in touch after graduation. Several have been returned in person to those who now have children attending South Callaway schools.

The project, which is no longer an incorporated lesson plan, required seventh-grade students to practice letter writing by writing a note to their future selves. Some of the letters that weren't properly sealed included aspirations. One letter writer aspired to be an artist; another complained about receiving a mother's scolding for neglecting chores.

Glover, who is now a school board member for the district, said she had an "a-ha" moment when she heard the letters had been found - much like the feeling students get when they forget their homework.

"I was tickled to hear that they were making the effort to return the letters," Glover said. "It was bittersweet to hear about the letters, which represented a special time in my career. They were sponges and my favorite grade to teach, they were muddy since they had one foot stuck in childhood with the other in adolescence, but they were fun. I cherish those memories."

Students who have yet to receive their letters: