Ex-prisoner works to free the wrongly convicted in Missouri 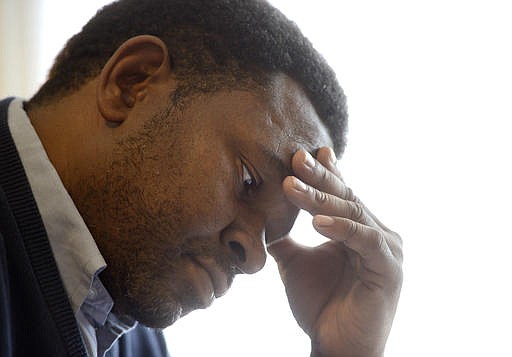 In this Nov. 21, 2016 photo, Anthony Williams takes notes while reviewing a case file in his home office in Columbia, Mo. Williams is the founder of Missouri Prisoner Advocacy Consulting which provides mitigation services to prisoners.

COLUMBIA, Mo. (AP) - It's been a long time coming, but during a five-day visit with relatives in St. Louis over the Thanksgiving weekend, Anthony Williams finally was able to embrace the holiday spirit.

Williams, who at the age of 14 was sentenced to life in prison for a 1993 murder he says he didn't commit, managed to walk out as a free man on July 3, 2014, the (Columbia) Missourian reported. The Columbia resident now works full-time at Missouri Prisoner Advocacy Consulting, a company he created to help poor prisoners. He started the firm after working nearly two years as a law clerk for Jennifer Bukowsky, the Columbia attorney who helped set him free.

Over Thanksgiving, Williams and his son, Anthony Robinson, were able to return to his hometown to see his mother, grandmother and younger sister and to have Thanksgiving dinner with his pastor's family. Although he enjoyed the visit, he said it brought back memories of prison, where for years he struggled to suppress the holiday spirit.

"Holidays are a mixed-bag for me," Williams said.

Williams was convicted of first-degree murder in the death of Cortez Andrews, who was also 14 at the time. Andrews was shot during a fight outside a St. Louis dance hall. Williams maintained his innocence.

Williams said his conviction was the result of a poor public defender and the prosecutor withholding evidence, including a 911 tape in which a witness identified another person as Andrews' killer.

"The prosecutor was able to get up there and say everything in the world against me and ... nobody fought for me," Williams said.

Williams met Bukowsky in 2012 after the U.S. Supreme Court decided in the landmark ruling Miller v. Alabama that mandatory life sentences without parole for juveniles were cruel and unusual punishment and therefore unconstitutional. Soon after, the Missouri Public Defender's Office in Columbia asked Bukowsky if she could represent any of the indigent juvenile prisoners who were serving such sentences.

Bukowsky reviewed all the cases and decided to take Williams' because he was the youngest at the time of his trial. She determined that Williams' constitutional rights had been violated when the court imposed his mandatory life sentence, and she came to believe Williams might be innocent.

Bukowsky found seven people who said Williams did not kill Cortez, and she said prosecutors knew of at least three witness statements that contradicted those who identified him as the shooter. The victim's identical twin also said Williams wasn't the killer.

Bukowsky filed a Sunshine request with St. Louis prosecutors asking for the 911 tape that was withheld. She also filed a writ of habeas corpus in Cole County Circuit Court, arguing that Williams was innocent and requiring that his continued incarceration be justified.

Eighteen months later, Cole County Circuit Judge Daniel Green granted her petition and gave the St. Louis circuit attorney the option of retrying Williams. When prosecutors compromised by offering the lesser offenses of second-degree murder and armed criminal action - along with a sentence of the 20 years time he had already served - he and Bukowsky took the deal.

During his seven years in Potosi, Williams said he faced a lot of mistreatment.

"I guess prison was my introduction to injustice," he said.

Williams said he saw systematic racism. The prison staff picked on him because he was young and black. He was targeted by predatory prisoners and by guards.

"They just treated you poorly," Williams said. "When a young person gets to prison and people just presume him as irrefutably bad, the system will penalize you for going to prison young."

Williams said he was often written up unreasonably for breaking prison rules. Guards insulted him and made him walk in a straight line on his way to classrooms. If he fell out of line, he would face time in "The Hole," a segregated cell with no privileges. He once spent 18 months in The Hole for a riot he says he had nothing to do with.

Potosi also had a rigid visitors policy. His parents often were denied the chance to visit him. His mother was once turned away because the staff said her pants were too tight, even though she had worn the same pants on her previous visit.

The prison was terribly segregated, too, Williams said. Black inmates were placed in the same cell areas and were given fewer opportunities to work in desirable prison jobs. Williams said maintaining his humanity was a constant fight.

"I never gave up, and I just could not embrace the fact that I would spend the rest of my life in prison," Williams said.

His efforts to regain his freedom began quickly. He started going to the law library to study and learn from other inmates there. Because his first experience with an attorney went sour, he said, he knew he had to fight for himself.

Williams earned his general education diploma by the age of 17. His older sister, Renalda Carter, encouraged him to read more. He began to read extensively in the library and became interested in non-fiction. He also read and wrote poetry.

He later began working at the law library by cleaning and stocking books. Although he didn't know much at first, he read books full of case law and gained a strong understanding of the criminal justice system. That led him to help others who had little knowledge of the law.

Williams has faced a lot of difficulty fitting into society since his release. The biggest challenge was restarting his life at the age of 34, having spent more than half his life in prison.

He has had to learn over the past two and a half years how to be a responsible adult: paying bills, managing a credit card, opening a bank account and filling out job applications.

"People in prison and people in society function on two different levels," Williams said. "They communicate differently ... One of the best ways to survive incarceration is to keep people from knowing as much about you as possible."

The rigid rules of prison removed any sense of individuality. He had to inform the guards of everything he was doing.

"Freedom to me now just means all of the small things," Williams said. "What it means is to speak freely, move freely."

Bukowsky offered Williams a job at her law firm because of his knowledge of the post-conviction process. He came to Columbia for what he called his dream job and worked for nearly two years as a law clerk. He was involved in the 2013 appeal of Jessie McKim, who was wrongly convicted of murder in Adair County, and in last year's appeal by Kelli Smith, who was allowed to plead guilty to a misdemeanor after causing a crash in 2012 that killed Thomas Sullivan in Montgomery County.

Williams also reviewed hundreds of cases of inmates claiming their innocence and found a number in which he suspected impropriety. That's one of the things that drove him to create his own company.

Bukowsky praised Williams. "He is a learner, a thinker and passionate," she said. She noted that Williams like to read about philosophy.

At Missouri Prisoner Advocacy Consulting, Williams aims to use what he has learned to help others navigate the criminal justice system. He has done six case evaluations since he started the company in January 2016.

He primarily helps investigate inmates' stories and organizes their documents in Dropbox to make them searchable and manageable for researchers, litigators or anyone else who might need to review them.

Williams' son, Robinson, was born several months after he went to prison, and he had visited Williams with his grandmother since he was a baby. Still, it wasn't until Williams was released that Robinson really got to know his father.

When he was young, people used to tell Robinson that he looked and acted like Williams. But he had no strong impression of his father. All he heard was people telling stories about him.

"When he first came home, it was like a period when we still had to get to know each other because we really didn't know each other," Robinson said. He now describes his father as "kind" and "tough."

Robinson was studying criminal justice at Lincoln University before Williams came home but left school to help Williams build his company. Working together has given the two of them a chance to become better acquainted.

"I just really want to apply everything to the company right now to see if we can really do something," Robinson said.

Williams said it takes a lot of time and money to evaluate a person's case, so he wants to provide an affordable and timely service to people who have been waiting years for attorneys to review their cases.

"I'm trying to help them get their cases back on track," Williams said.

One of his clients is a juvenile who was sentenced to 60 years for burglary and sexual assault. Williams said that the teenager was involved in the burglary but not the assault and that the same Miller v. Alabama ruling that helped lead to his freedom applies in the case.

Most clients pay Williams to promote their innocence. He doesn't go to court like attorneys but will build legal defense files and help raise money. He uses social media to bring their stories to light, and created a website that gets about 1,500 visits a month.

Williams also files Sunshine requests on prisoners' behalf, and helps family members learn about Department of Corrections policies. He can advise inmates on how to get credit for good behavior, or help those who are on probation or parole.

For himself, Williams hopes to someday be compensated by the St. Louis circuit attorney or police department for his murder conviction. The circumstances surrounding his release might make that difficult, though.

"Rarely do the prosecutor or the police concede to their wrongdoing," Williams said. "It is easy to get wrongly convicted, but it is difficult to receive compensation."