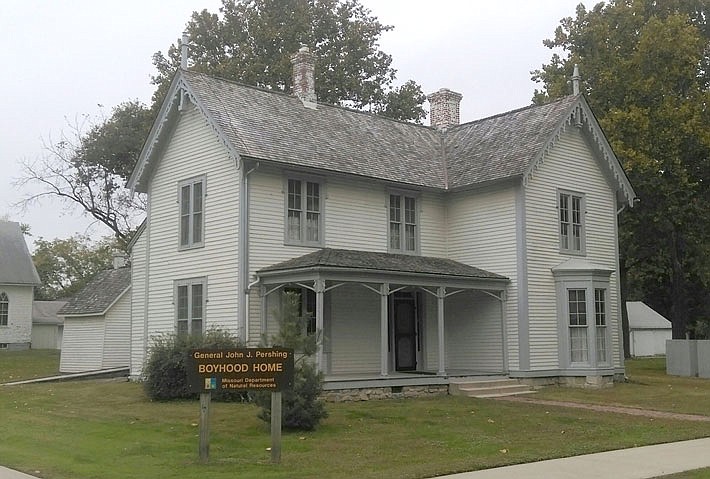 The town of Laclede is little different than the hundreds of small towns scattered across Missouri, many of which are situated just off of an interstate and have little identification other than a road sign noting their existence. But harbored in this small community in the northwestern section of state is a once-bustling town that was the home of the commander of the American Expeditionary Forces during World War I.

"When he was 6 years old," Heaney continued, "he moved with his family into the Gothic-style house in Laclede, where he lived until he was 21 years old."

As Heaney explained, while spending his formative years in the community of Laclede, Pershing began to develop his character and work ethic while teaching at the Prairie Mound School for a couple of years before leaving for the U.S. Military Academy at West Point in 1882. The future general went on to graduate from the academy four years later.

After leaving Laclede, Pershing completed a 38-year military career that included the command of cavalry troops during the latter part of the Indian Wars, the charging of San Juan Hill during the Spanish-American War, service in the Philippine Insurrection and the pursuit of Pancho Villa during the Mexican Border Campaign.

"Many people don't know that he, along with Gen. Enoch Crowder (another Missouri general), served as an observer during the little known Russo-Japanese War (in 1905)," Heaney said. "It was during this time that he took a lot of notes about tactics, mobility, counter-mobility and marksmanship; all of which would be used during the First World War."

With all of the military experience acquired during the years following his graduation from West Point, it was Pershing's time as the commander of the American Expeditionary Forces that provided for him the greatest recognition and the rank equivalent to a six star general.

Having acquired notoriety through his military endeavors, the people of Laclede united in the 1930s in an effort to permanently preserve the memory of their hometown hero by establishing the Pershing Park Memorial Association (PPMA). The association soon purchased land that was later donated to the state of Missouri for the Pershing State Park, which opened in 1937.

The memorialization of the general progressed with PPMA's purchase of Pershing's boyhood home in Laclede in 1948, the same year Pershing passed away and was laid to rest in Arlington National Cemetery. In 1952, the home was sold to the state, opened to the public and dedicated as a state historic site in 1960.

"The bronze statue of Pershing was brought here from Jefferson City (in 1968) after one of our local legislators lobbied to have it moved to the site of Pershing's boyhood home," said Heaney. (The Pershing statue was erected in 1957 and initially stood on the east grounds of the state capitol in Jefferson City.)

"A 'Wall of Honor' was erected in the 1980s," Heaney said, describing the marble blocks surrounding the Pershing statue. "The inner walls list the names of World War I veterans and the outer walls contain names of veterans from World War II to present."

A brochure from the PPMA notes veterans can have their names added to this memorial for a nominal fee.

The PPMA continued to honor Pershing's legacy by purchasing the Prairie Mound School House in 1982 - the building where Pershing taught classes prior to his military service. Once located several miles outside of Laclede, the school house was moved to the Gen. John J. Pershing Boyhood Home State Historic Site in 1983, renovated in the 1990s and now serves as a museum.

During the spring of 2015, the PPMA purchased a city block adjacent to the historic site. On the properly sits a 7,800-square-foot building that is being remodeled to serve as the Pershing Memorial Museum and Leadership Archives, scheduled to open in 2017.

The facility will feature a "modern exhibit gallery (and) will display educational, hands-on, and interactive displays spanning General Pershing's life and military career," according to the PPMA's website. Heaney noted the grassy area in front of the museum will feature a commemorative Poppy Garden containing soil sent from the eight World War I American Cemeteries in Europe.

"The poppies that will be planted are a hybrid between the American Legion and the Flanders Fields poppy, and the seeds were donated by the Smithsonian (Gardens)," Heaney said. "Since World War I, the poppy has served as an iconic symbol of wartime service and sacrifice."

With the expansion of the historic site throughout the years, Heaney explained that each new addition bestows additional insight into the life of one of the most important military commanders of modern history.

"But one of the most striking aspects about what we do here," Heaney continued, "is making a connection. When the younger generation is able to see where Pershing grew up and all of the things he did, they begin to understand that that this might one day be them that they might go to also accomplish great things."

Jeremy P. Amick writes on behalf of the Silver Star Families of America.