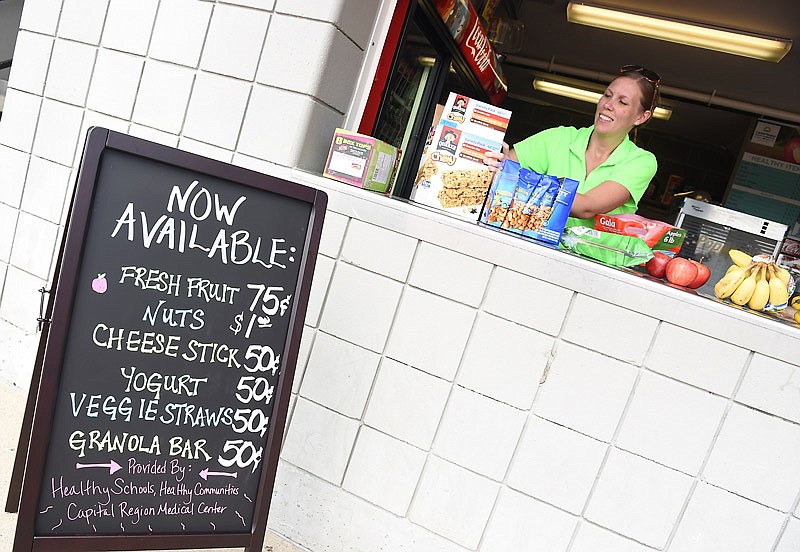 Hot dogs, hamburgers, candy and soda are a typical fixture of football concessions, but added to the list this year are healthy options at Jefferson City High School and Helias High School home games.

The Healthy Schools, Healthy Communities program is providing fruits, vegetables, cheese, nuts, granola and yogurt for $1 or less, said coordinator Ashley Varner. The organization is providing the items to the schools for football home games this fall through a five-year, $5,000 grant from Missouri Foundation for Health used to fund projects like this one, as well as the bike lanes on Bolivar Street and fresh fruit for kids at six area grocery stores.

Healthy Schools, Healthy Communities has also partnered with South, East, Callaway Hills and Thorpe Gordon elementary schools to start community gardens, a fitness club, inter-mural sports, refillable water bottle stations and more, Varner said. The organization reached out to those schools because of their high free- and reduced-lunch rates. The goal is to teach the students how to live healthy lifestyles through eating and activity.

The Eldon R-1 School District was the first school to offer healthy concessions and has been successful, she said. The district has been selling the healthy snacks for three years, and now its No. 1 selling concession item is frozen grapes. The Eldon community has taken on other healthy projects and reduced its city-wide obesity rate by 1 percent.

The goal of the five-year grant is to reduce obesity by 5 percent in five years.

The football games bring out thousands of people, which is why the organization targeted the home games as a project. Varner provided updated signage for the concession stands listing the new, healthy items.

This year, the Jays will offer the additional options only at home football games. Helias has requested to expand the healthy concessions to basketball and volleyball games as well.

Officials from Jefferson City Public Schools and Helias High School said they think the new concessions will be a success.

"We all have the same goal and common cause, and that's creating a healthy community," said JCPS spokeswoman Amy Berendzen. "I think and believe that parents and patrons will accept this and be happy about the offerings. It'll be an interesting test market with this new take on concessions."

If the healthy snacks are a hit, Berendzen said, the district will be interested in offering them in future years.

Helias Activities Director Brad Dempsey said he thinks the items will be popular, especially because of the price points. If it goes well, the school may tweak the snacks offered or add more, he said.

"I think we all always think about how we can be healthier, considering the fact that the concessions might be - especially with today's age - dinner," Dempsey said. "(Families) get off work, get everyone to the game, and that's where they're going to eat."

Helias hadn't planned to add healthy options to its concessions, but when Healthy Schools, Healthy Communities approached administrators, they jumped on board, he said.

Varner said she has heard a lot of positive feedback from the community about the new concessions and believes it will be well-received this year.