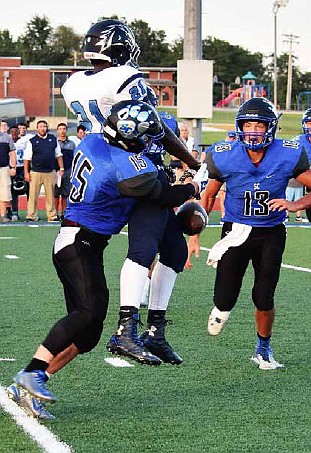 South Callaway sophomore free safety Peyton Leeper breaks up a pass intended for Tolton junior wide receiver Eyob Teklesenbet during the Bulldogs' 38-15 win over the Trailblazers in the season opener on Friday, Aug. 19, 2016 at Mokane. Leeper returned a fumble 25 yards for a touchdown early in the first quarter.

MOKANE, Mo. - South Callaway's preying defense was more than accommodating in helping the Bulldogs get acclimated on offense.

Sophomore free safety Peyton Leeper and sophomore linebacker Bradyn Belcher both returned turnovers for touchdowns, and South Callaway converted another Father Tolton miscue into a score as the Bulldogs roughed up the Trailblazers 38-15 in Friday night's season opener.

South Callaway owned a narrow 12-8 edge at halftime, but took control behind a 19-point outburst in the third quarter. Leeper, junior running back Kaden Helsel and junior quarterback Landon Horstman provided touchdown runs during that span to help energize the Bulldogs' running attack.

"It takes the pressure off of your offense," Bulldogs head coach Zack Hess said. "Being the first game and not having a lot of game reps together, it was important that our defense played well to give our offense time to get that chemistry going.

"They did, eventually, and we knew it would take a while, so the defense did a really nice job of keeping us in the game early."

The season was less than a minute old Friday night when South Callaway's defense struck for the first time. An errant pitchout from Tolton junior quarterback Steven Devine skipped off the turf and was plucked out of the air by Leeper, who then darted 25 yards for a touchdown with 11 minutes, 11 seconds left in the first quarter to give the Bulldogs a 6-0 lead.

The Bulldogs' defense experienced one of its few lapses on the Trailblazers' next possession when senior wide receiver Carson McCarty shot through a seam in the middle and scored on a 57-yard run at the 10:16 mark. Junior running back Patrick Edwards added the two-point conversion to put Tolton on top by two points.

The Trailblazers were able to protect their advantage before making a critical mistake late in the first half. Facing a fourth-and-15 at South Callaway's 44-yard line, Devine tried to get off a quick kick but fumbled the ball and then was tackled for a 1-yard loss as the Bulldogs took over.

Junior wide receiver Jarrett Livengood made a diving catch on a 30-yard pass from Horstman, setting up Helsel on the next play as he bolted 21 yards for a touchdown. That would put South Callaway in front to stay at 12-8 with 3:27 to go in before halftime.

The Bulldogs stumbled at the start of the second half, fumbling the opening kickoff as Tolton recovered the ball at the South Callaway 18. Horstman, though, made an impact on the defensive side from his linebacker position when he picked off Devine three plays later at the Bulldogs' 11.

Helsel gained 23 yards on first down and then Leeper took a handoff from Horstman and blazed his way 66 yards for a touchdown with 9:52 left in the third quarter. The South Callaway offense had finally found its footing.

After the Trailblazers were forced to punt on their following series, the Bulldogs pieced together a six-play, 84-yard scoring drive. A 50-yard run by junior running back Dalton Stone set up Helsel's 1-yard touchdown run at the 6:40 mark to extend South Callaway's lead to 25-8.

A three-and-out by Tolton then led to the Bulldogs' third straight touchdown. Horstman capped a five-play, 41-yard scoring drive by pushing his way into the end zone from 2 yards out with 2:47 remaining in the quarter.

Stone ended up with a game-high 115 yards on only eight carries as South Callaway accumulated 325 yards on the ground. Helsel also supplied 84 yards in just nine attempts and led the Bulldogs with 42 yards receiving on a pair of catches.

"That chemistry with the offensive line, just not having that game experience, and then as the game moves forward they started to gel a little bit and then opened up some running lanes," Hess said. "Our running backs did a really good job of making the cutbacks, so their vision was really good.

"Then the speed and athleticism of some of those guys took over with some of those long runs. We were hoping to get a few of those tonight."

Belcher punctuated South Callaway's scoring and a remarkable night for the defensive unit when he intercepted a Devine pass and returned it 65 yards for a touchdown with 7:38 to play in the game.

The Trailblazers logged 104 yards rushing, but most of that output came on McCarty's long touchdown run. Tolton - which finished with 202 yards of total offense - put up a late score on freshman running back CJ Campbell's 3-yard touchdown run against the Bulldogs' defensive reserves with 1:27 left.

"That's what we talked about, just trying to not give up the big play and they did get us early," Hess said. "But (the defense) settled down, they just started focusing on their keys and the things that they had to do, and I think they just got into the flow of the game."

South Callaway heads out on the road this week when it travels to the north-central part of the state to clash with Milan. The Wildcats opened their season Friday night with a 25-14 loss at Mark Twain.

"(Opening) games like these are great because you get the victory, but then you are also exposed to things that you really need to work on and get better at," Hess said.