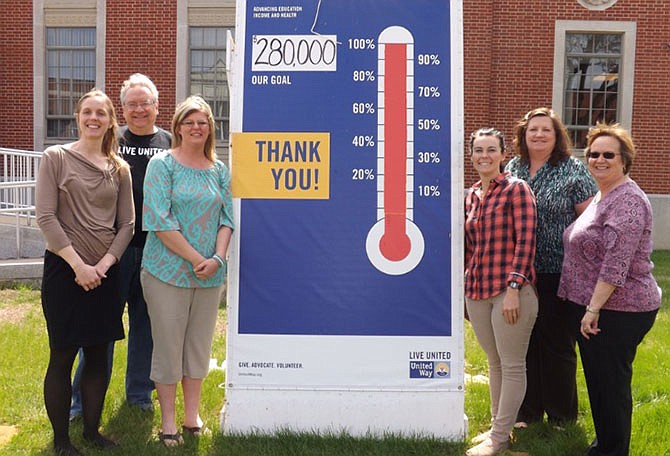 The Callaway County United Way (CCUW) has reached its goal of raising $280,000, which will be used to fund 14 area nonprofits that in turn are able to assist community members in any number of ways.

CCUW typically has three major fundraisers per year: United Way Campaign Kickoff and Radiothon, Santa Breakfast and the Celebrity Waiter Banquet, but according to Megan Fletcher, executive director of CCUW, the community does a great job supporting the nonprofit year round.

"We want to let the community know how much we appreciate them and thank them for their continued support," said Fletcher. "We wouldn't have reached our $280,000 goal without them."

The same sentiment can be heard from the agencies who receive the funds.

"We couldn't make it without those funds," said Amanda Young of the Callaway Senior Center. "We serve a hot meal for seniors to come and eat every day at lunch. The money goes for food to provide those lunches."

"The funding means so much to CARDV," said Erica Nanney, executive director/Sexual Assault Program coordinator for the Coalition Against Rape and Domestic Violence (CARDV). "But more than that is the impact it has on the individuals we help, the victims of domestic and sexual violence."

Nanney said CCUW is the only funding source that is specifically designated to helping Callaway County individuals with financial assistance when they leave a violent situation.

"That assistance is critical to help with rent, utilities and transportation when individuals are rebuilding their lives," she said.

Fletcher said she had recently attended a community breakfast held by Westminster College President Benjamin Ola. Akande and was impressed by his comments, especially one that warned against becoming irrelevant. To prevent such a thing, Akande suggested coming together as a community and inviting change. Fletcher said she agrees with the leader's sentiments.

"We are looking forward to becoming more involved in the community and making new changes," said Fletcher who has been with the nonprofit a little over a year now. "We hope to establish new relationships and new beginnings."

The CCUW has closed their application period for new agencies for this funding cycle and is now working toward agency hearings and then agency allocations, which will take place in the beginning of May.