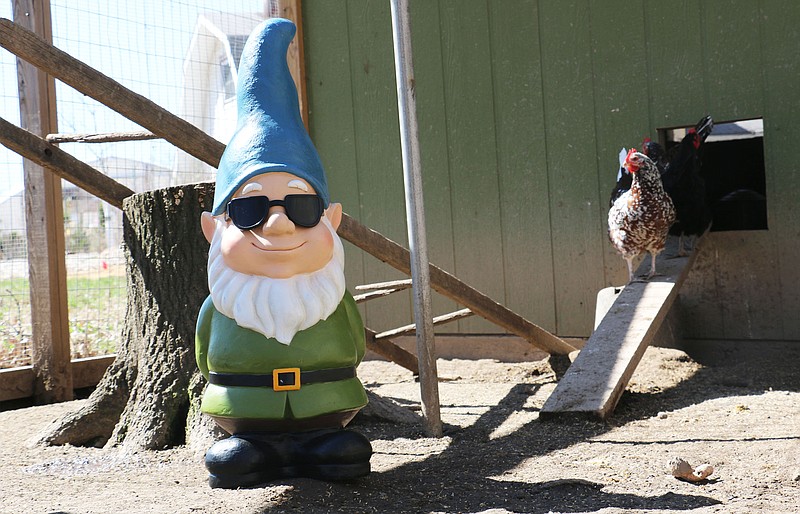 Henry Bellagnome poses for a photos with chickens at Callaway Fields Monday. Callaway Fields, a plant nursery in Auxvasse, turned 10 on Monday. Bellagnome is the newest mascot for Callaway County in an effort to promote businesses. 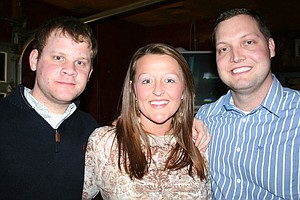 The stage of Fulton's old theater on Court Street was dark except for a few old stage lights, which shone down on a white window that belonged to an old set. In window's light, stood a short, plastic gnome with a green shirt, blue hat, white beard and black sunglasses.

Scott Meislin, general manager of Super 8 Kingdom City hotel, said "Oh, gnomeo. Oh, gnomeo. Where art thou gnomeo," as he positioned the gnome on stage during a tour of the old Fulton Theatre, which the Brick District is helping to renovate. Steve Forck, also from Super 8, stood near the stage, taking photos.

Meislin and Forck named the gnome Henry Bellagnome and have made him the tourism mascot for Callaway County. Meislin and Forck photograph Henry at various county businesses then post the images on social media in an effort to promote local commerce.

"He gets treated like a real person," Meislin said.

Meislin said one of their most memorable stops was at the Dollar General Distribution Plant.

"The gleam in everyone's eyes as they saw the gnome walk around the giant distribution center, it was wonderful," Meislin said.

While at the distribution center, Henry went through orientation and got to test out the factory's machinery.

"They really got into it. They treated him like he was a real gnome and they printed up a name badge with his picture on it, just like if he had gone through the application process," Meislin said.

Meislin and Forck first spotted Henry at the Fulton Walmart less than a month ago. Meislin said he thought of the idea of traveling from business to business when he saw the gnome. Forck and Meislin purchased Henry and chose the first stop for Henry's travels: the Brick District, which Meislin has been involved with through his position at the Super 8 hotel.

Meislin and Forck took Henry up and down Court Street, stopping in each store as they walked. One of their first stops was Well Read books. Bookstore owner Brian Warren said he thinks having a tourism mascot is beneficial for the area.

"He's getting a lot of traction on Facebook and other social media," Warren said. "People are having fun following his travels around. I think it's a good concept."

Henry Bellagnome's Facebook page has received more than 200 likes in a little more than 20 days.

"He has almost as many friends on Facebook as I do," Warren said.

When they take Henry's photo, Meislin and Forck said they try to position Henry so that the majority of photos are more about highlighting a business and what they have to offer rather than focusing solely on Henry. Henry's Facebook page is filled with photos of his visits to various Callaway businesses as well as a few other stops the gnome has made outside of the county.

"He's getting around," Warren said with a chuckle, speaking of the gnome's travels.

Henry has been to about 30 businesses in his first month on the job - including the Brick District PlayHouse, Callaway Fields, Well Read, Fulton Cafe, 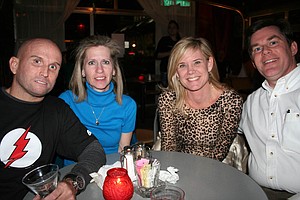 the Callaway County Courthouse and Fulton Sub Shop, to name some. Henry, with help of Missouri State Rep. Travis Fitzwater, R-Holts Summit, also made a stop at the Capitol building in Jefferson City.

Initially, Meislin said their plan was for Henry to mainly stop by Fulton and Brick District businesses. They decided to expand to the entire county after Fulton Cafe owners suggested it.

However, Henry isn't just meant to attract new tourists to the area, Meislin said. They are also hoping Henry will help remind Callaway residents of all of the businesses and what the county has to offer - something Meislin said traveling with Henry has helped him remember.

"It has opened my eyes to how big land-wise Callaway is," Meislin said. "We have pretty much everything."

Meislin said the gnome will make frequent stops to towns outside of Callaway to help cross promote tourism with other Missouri cities. This past weekend, Henry stopped by Ste. Genevieve and visited the Bolduc House Museum Squirrel there, named Zuts. Meislin said they plan on taking Henry to Hermann one day in an effort to encourage Fulton residents and visitors to take a day trip to Hermann and vice versa.

"By working with other mascots and other counties and museums around the state of Missouri, we get exposure to a much broader audience. It is, of course, important that people within Callaway County know what's in the county and these hidden gems that might not be on their radar, but it's even more important to get outside money to come into Fulton and Callaway County," Meislin said.

Any business interested in having Henry stop by for a visit, can schedule a day by calling Meislin at (573) 220-9347. To follow the gnome's travels and adventures, check out his Facebook page "Henry Bellagnome" and his blog, henrybellagnome.wix.com/fultonmissouri.

"We aren't going to stop until we hit all of the businesses (in Callaway)," Meislin said.