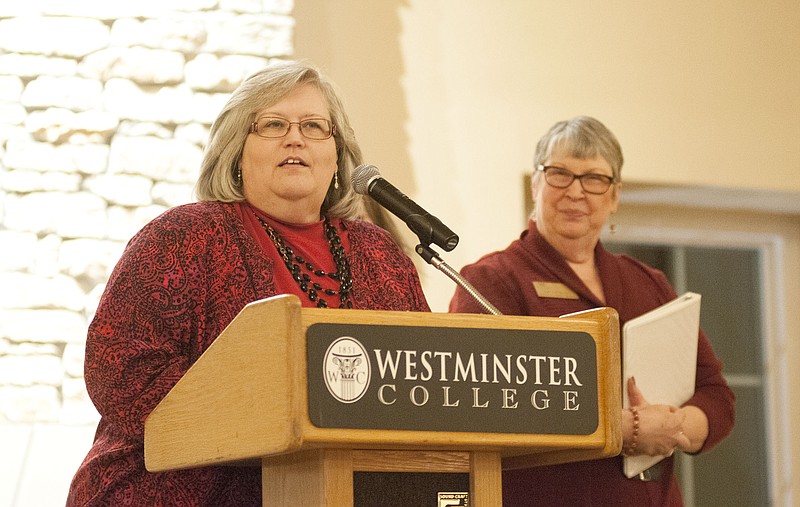 Cathi Miller Harris with Westminster College gives an acceptance speech after receiving the Loyal Subject Award from the chamber of commerce Thursday night during its annual banquet.

Harris, the major gifts coordinator at Westminster, said she believes strongly in something her grandmother used to say: "Bloom where you're planted."

"Wherever you find yourself - if that's where God's placed you if you're religious or if circumstances have placed you - just to do the best you can with what you have, where you are," Harris said.

Harris was one of four community members who received awards at the chamber banquet Thursday night at Westminster College. The J. H. Atkinson Award went to Brick District Association President Tom Riley and the organization's board of directors. The Chamber Leadership Award went to Clint Smith with the Callaway Electric Cooperative, and the Allen Conner Youth Award went to North Callaway High School senior Bailey Kemp.

Cathi Miller Harris started working at Westminster in 1998, but she came to the Callaway County community in 1994. She moved to the county from Maryland due to a family situation. She said she was looking for a place to raise her three children and after research, settled on the southern Callaway region.

"There's no way to research how kind people are going to be and how you're going to fit in," Harris said. "I was even more pleasantly surprised than I had expected to be."

Harris said her involvement in the South Callaway School District made her feel like part of the community. She was involved as a room mom, in the parent-teacher organization and with the school board.

"You meet people and you connect and you have a shared desire to make the community a better place," Harris said.

She added that she is grateful to have made any small difference in the community since she became part of it two decades ago. When asked what advice she has for newcomers to the Callaway County community, Harris said avoiding assumptions is key.

"Have an open mind and an open heart. You can't make assumptions about anybody based on their economic status, skin color, family situation, their job situation - life's too short. Get to know people," Harris said.

And, she added, just as her grandmother used to say, bloom where you're planted.

Jacque Brazas, with Riley and Dunlap PC, presented the award to Tom Riley and the Brick District Board of Directors. The award is given to organizations or leaders who contribute to the community on a voluntary basis.

The Brick District was formed in 2011, and its board has worked to support business in downtown Fulton, Brazas said. They have held events - like Autumn on the Bricks, Morels and Microbrews and the Farmer's Market - in an effort to bring more people to the downtown area. Riley, Brazas said, has been instrumental in the work the Brick District Board does.

When Riley took the stage with his fellow board members to accept the award, he said the board has worked together to accomplish everything it has done. Then, he quickly passed the microphone off to Gary Vaught, Brick District board member and Beks' owner, who echoed Brazas' sentiments.

"It really would never of worked with out Tom Riley," Vaught said. "Without Tom Riley, we would not have the Brick District as well as it is, and it's going to get much better."

Marty Martin-Forman, chief operating officer of the Fulton State Hospital, presented Clint Smith with the award. She said Smith first impressed her four years ago when he presented his vision for the county.

"And then, due to economic times, his whole vision got put to the wayside because of what we had to deal with here. But during that time, he never lost his enthusiasm for what he believed the chamber could become and what the county could become," Martin-Forman said.

The award is given to someone who demonstrates leadership and involvement in chamber activities. She said young leaders are imperative to the community.

"There will come a day ... when those of us who have been around a while, we're going to sit down," Martin-Forman said. "We need to have young people step up and be willing to give up there time to volunteer to make our home better than it has ever been."

Smith, who has been on the chamber board for seven years, said the community members make the Callaway County community thrive.

"I thank you all. You all are the people that stick your necks out, you're entrepreneurs; you are the people who provide for the rest of us," Smith said to those gathered Thursday night.

Bailey Kemp, a senior at North Callaway High School, was not aware she was receiving the award until her name was called. She received the award for her active involvement in community activities. FFA has been at the center of her involvement. She said she is most proud to have been involved in the Callaway County Youth Expo.

Kemp said the award was an honor and completely unexpected.

She plans to attend the College of Agriculture at Mizzou in the fall.