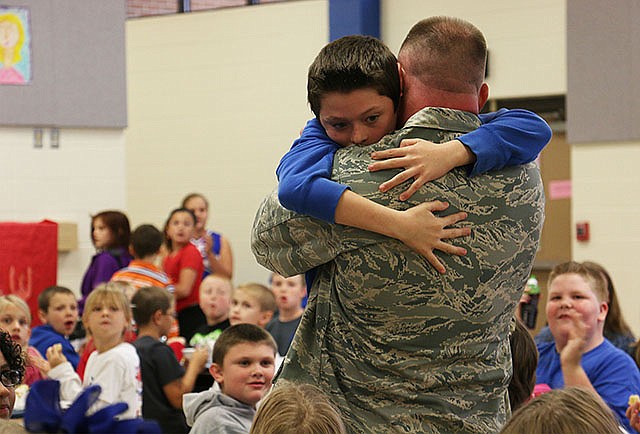 South Callaway fourth-grader Carson Russell tightly embraces his father - a sergeant in the Air Force Reserves who had been in Afghanistan for almost seven months. His father surprised him at school Thursday after coming home from Afghanistan.

Just like every other day, Carson Russell, South Callaway fourth grader, sat down at a table in the school's cafeteria Thursday and opened his bright green lunch box. Russell's seemingly ordinary day quickly changed into what he describes as the "Number one best day ever."

While Russell was eating lunch, his father - a Staff Sgt. in the Air Force Reserves who had been in Afghanistan for almost seven months - approached his lunch table.

At first, Russell sat quietly, starring at his father. Then, he ran to him for a long, tear-filled hug.

"My heart just shot like a rocket," Russell said, describing how he felt when he first saw his dad in the cafeteria.

When he first saw his son, Daniel Russell said he felt relieved.

Carson said he thought his dad would be coming home Tuesday. He added that he has missed everything about his dad the past seven months.

Carson and his mom had been counting down the days until Daniel would arrive home from Afghanistan's Bagram Airfield military base where he was serving with the 442nd Fighter Wing. Daniel said he wanted to do something special for his son and decided to surprise him.

Carson's dad, step mom, mom, step dad, grandma and two baby brothers - one belonging to his mom and step dad and the other to his dad and step mom - all surprised him at lunchtime. 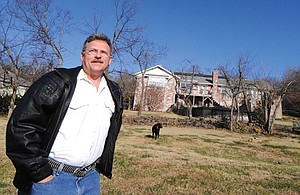 Photo by J.T. Wampler
Calvin Yockey is a homeowner on Mount Sequoyah in Fayetteville who installed about $28,000 in solar, geothermal and other energy improvements on his home. 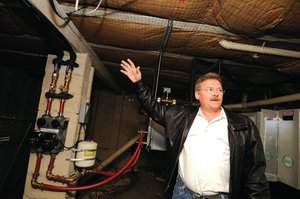 Photo by J.T. Wampler
Calvin Yockey shows the inner workings of his geothermal system in his Fayetteville house.

Upon his arrival, Daniel also got to see and hold his now 5-month-old son, Mark, for the first time. While Daniel was in Afghanistan, his wife, Danielle Russell, gave birth to Mark. Daniel witnessed the birth via Skype and saw Mark when he got off the plane.

"I'm glad he is home and we're all complete now," Danielle said.

"I'm grateful for his service and proud to have him home," Gallatin said. "Now we can be a complete large family again."

Gallatin told Carson that his dad would be home Tuesday. While it was hard to keep his dad's true return date from her son, she said surprising him at school was worth it.

"It was incredible. It made my heart happy," Gallatin said.

She said the past almost seven months without Daniel has been hard for Carson.

"I have a wonderful husband and he's been a great step dad, but it's not the same," Gallatin said. "We talked about it a lot and he got to Skype with his dad a couple times and talk on the phone. (But) It's not the same. It's not enough."

Gallatin, Carson's other family members and Elementary School Principal Corey Pontius coordinated the logistics of the surprise for almost two weeks. When Pontius first received Gallatin's phone call to set up the surprise, he said he was honored.

"I was excited and honored that she'd allow us to be part of such a special occasion," Pontius said.

"It was very overwhelming seeing that response," Pontius said.

Carson will spend his long weekend away from school catching up with his dad. The father and son had big plans as they left school Thursday afternoon - Halloween costume shopping.

Before Carson could leave school early, Pontius handed Carson's mom the school's student sign in/out sheet on a clipboard. Gallatin asked Pontius what she should put in the "reason for leaving" column. Pontius took the sheet and wrote in two words, "Dad's home."