Mizzou students give back, help with new Kingdom Projects project 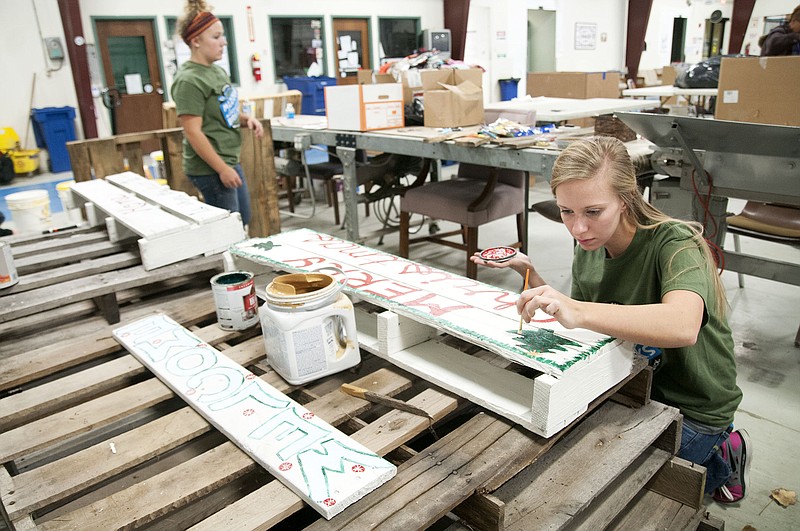 Emily Hampton, a University of Missouri sophomore, paints wood pallets Saturday inside Kingdom Projects Inc. as a service project. Hampton and 11 other MU students who volunteered at KPI this weekend are members of the university's Mizzou Alternative Break program in which students forgo a break - Thanksgiving, semester, etc. - to participate in a volunteer activity. Students decorated the wood pallets which will be sold to benefit KPI. The painted pallets will be used as examples for employees when KPI rolls out its own pallet project.

Twelve students from the University of Missouri spent their weekend at Kingdom Projects Inc., organizing clothing in the resale shop, painting its walls and giving the organization a kickstart to its new wooden pallet project.

The volunteers, both male and female and ranging in class, are members of the University of Missouri's service program, Mizzou Alternative Breaks, which sends groups of students around the state and the nation on service projects.

Catherine Nania painted KPI's walls a lilac color on Saturday. She said she decided to join the program to meet new people and use her abilities to make something "a better place." She and her fellow volunteers wore T-shirts with the Mizzou Alternative Breaks logo on front and the phrase "A Ful-Ton of Service" on the back.

Although she was only a few hours into her work, Nania said she had felt personal fulfillment.

"I think it's been really rewarding already," she said.

The students also took part aiding in KPI's new wooden pallet project, painting wood boards with Christmas sayings. Decorated pallets will eventually be sold on KPI's website, and prices will range depending on the size of the artwork.

KPI receives wood pallets when miscellaneous items are shipped to the site, leaving the organization with a surplus of pallets. Creation of the pallet artwork helps fulfill KPI's reduce, reuse and recycle mission.

Dave Phelps, president of the KPI board, said the project will allow more high-functioning employees to better use their skills.

"This is a meaningful employment opportunity for our people," Phelps said.

Because the employees will eventually be painting and creating on their own pieces, KPI board member Jackie Butler said they will be able to call themselves artists - which will give them a sense of pride.

"They can see what they've accomplished," she said.

Pam Phelps, KPI volunteer, said the organization is planning on hosting a Pinterest Workshop Day as a fundraiser. The date and time are to be determined. Patrons will be able to participate in various Pinterest crafts, including pallet projects.