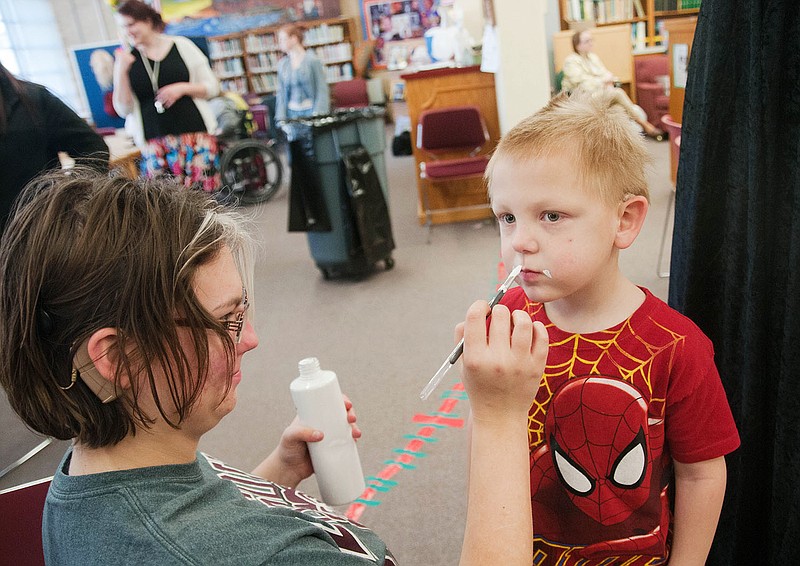 A student at the Missouri School for the Deaf paints a fake milk mustache on a preschooler inside the school's library on Thursday. During a "Reading is Fundamental" event, which encouraged reading for pleasure, students from various grade levels learned about animation and video through hands-on activities. Three preschool boys starred in a milk mustache commercial that will play in the school cafeteria.

"(I enjoy) seeing their creative thought process," McCarty said. "It's a good opportunity for the kids." 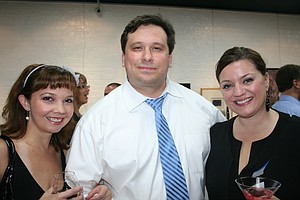 RIF is a federal literacy program that helps inspire children and teens to read through events and providing books for the students to take home.

Lucille Blackwell, MSD English and drama teacher, chose "Hollywood" as the theme for the event, which continues today, giving students a sense of the spectacle of movie making while promoting literacy.

Blackwell is from California and previously worked for a deaf TV and film company. One of her goals, she said, was to show the students that creating a video is "more than what you see on TV" and requires hard work.

There were various stations set up in the library. Students - preschool through high school - could watch an informational video on animation and practice their own drawing skills. Groups created videos ranging from an April Fool's Day episode to a scary movie.

Students learned how to draw in an audience by providing key information up front, Blackwell added. For the April Fool's Day video, Blackwell said the students began by stating Arnold Schwarzenegger was running for president in 2016.

Students signed cafeteria menus in front of a green screen and the videos will play in the school cafeteria. The green screen will be replaced with animation, therefore connecting the words the students are signing with images, Blackwell said.

Senior Andrea Crouch, who is in the drama class, said the event provided an opportunity to influence the children's futures because they are now exposed to drama, video and animation and could have motivation to pursue those fields.

"Deaf learn best if they have something to work with," Crouch said. "This is very visual and that's important."

McCarty said she like giving individualized attention to the students. Watching the students' faces "light up" during the activities was motivating for her as a drama student, she added.

Each student picked out a book to take home, which Librarian Virginia Johns said, "helps expand their personal library."