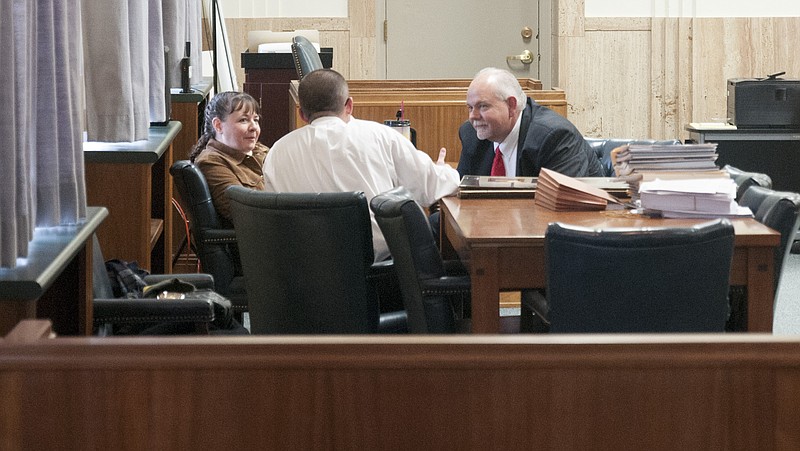 Sandra Plunkett, 40, of Holts Summit speaks with her defense council on Friday as jury deliberates.

Sandra Plunkett, 40, of Holts Summit will appear in front of Judge Gary Oxenhandler - presiding judge in the murder case against her - again on March 3 for sentencing.

A jury of seven women and five men found Plunkett guilty of first-degree murder and armed criminal action Friday in the death of her husband Paul Plunkett, a former Jefferson City police officer. The jury deliberated the case for three hours.

Paul Plunkett died Jan. 1, 2011 from a gunshot wound to the head. Three days later, Sandra Plunkett confessed to investigators she committed the murder.

The prosecution, led by Callaway County Prosecuting Attorney Chris Wilson, stated Sandra Plunkett murdered her husband in order to claim a $100,000 life insurance policy to pay for her heroin addiction. Justin Carver, public defender, represented Sandra Plunkett who pleaded not guilty, claiming the murder was an act of self defense against an abusive husband.

Before the verdict, the prosecution and defense were given their final opportunities to further their cases in closing statements.

Wilson said Plunkett's abuse accusation was a "glorious lie" that was "three years in the making." He referenced the days just after her husband's death in which she fabricated stories for investigators.

The first story she told investigators on the day of her husband's death that she saw a man wearing camo and holding a gun on her street who was probably the murderer. Days later on Jan. 4, 2011 she told investigators Paul Plunkett wanted to die in order to end suffering from an inflammatory colon disease which left him debilitated.

A key witness for the prosecution was Randy Deppe, who is currently serving time in the Missouri Department of Corrections. Deppe claimed Sandra Plunkett asked him to be her hit man or find someone who would murder her husband. Deppe said Sandra Plunkett told him the reward was a split of an insurance check.

Deppe's testimony, Wilson said, proved "cool deliberation," meaning Sandra Plunkett took time to plan her husband's murder, and therefore her act was not self defense. Wilson said he wanted Deppe to testify in court wearing his prison attire and handcuffs.

"That's who you go to when you need a hit man," Wilson told the jurors.

Wilson also reminded the jury of the Plunkett's financial struggles, pointing out their bank statements that showed accounts were overdrawn.

Carver's closing argument was largely based on the idea that police officers are loyal to one another. This loyalty, Carver said, was reason for Sandra Plunkett not to report abuse from her ex-cop husband.

Carver said she felt nothing would come of a report to police, except more abuse from her husband. In her testimony, Sandra Plunkett alleged her husband punched her in the face, beat her with his police baton and made her wear little clothing or be naked as he took photos of her for the Internet.

"Who do you call if it's the police that's the problem?" Carver asked the jury.

He added that her concerns were "ratified" when Sgt. David Rice with the Missouri State Highway Patrol told her during an interview on Jan. 1, 2011 that "we take care of our own."

Carver said Sandra Plunkett was "not afraid of what she did, but that they were going to take care of their own."

Finances were also addressed in Carver's closing statement. He reminded the jury that the Plunketts filed a malpractice lawsuit against the University of Missouri Hospital that was potentially worth millions.

In his rebuttal, Wilson said Rice was assuring Sandra Plunkett investigators would help her and find her husband's murderer when he said "we take care of our own."