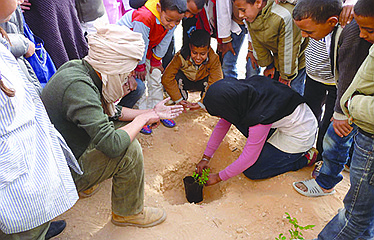 An organic garden gets started in a refugee camp in Algeria through Not Forgotten International. A group of Westminster College students is hoping to start a similar project in the Smara refugee camp this summer. The gardens provide a source of fresh fruit and vegetables in a community that otherwise is entirely dependent upon foreign aid.

Mulay Smara was born and raised in the largest refugee camp in the Western Sahara, where his family has lived for more than 34 years after being displaced by a Moroccan takeover of their homeland. 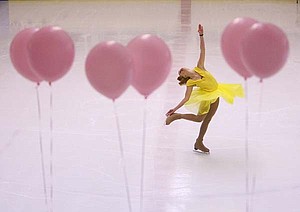 Photo by Stephen B. Thornton
Skating for the cure Lexi McClain, 16, performs with her Theater of Ice team during an ice show Sunday at the Skate for the Cure event in Little Rock. The event benefited the Susan G. Komen Race for the Cure Arkansas affiliate and featured a performance by Steven Evans, the 2009 U.S. Figure Skating Novice Men&#x27;s silver medalist. More photos are available at focus.arkansasonline.com.

Now a junior at Westminster College, Smara and several of his classmates have developed a project to draw attention to and help ease the plight of his neighbors back home.

Smara, Brianna Mormann, Martin Roa and Sandra Nivyabandi have secured a $10,000 grant from Davis Projects for Peace for their proposed Going Organic in Western Sahara project, but are hoping to raise another $3,000 to help achieve their goal of providing five families living in the Smara refugee camp with an organic garden.

"In the tight-knit community of the camp each garden will feed seven additional families," the group's grant application states. "We hope to improve the quality of life by providing an opportunity for hope through independence and self-sufficient living."

Smara said living in the refugee camp, "there is a lack of everything."

"It's the desert. It's the hottest place, there is no running water, no electricity, no school, no markets, no employment" Smara said. "We rely entirely on human aid - even for clothes."

Because the Smara camp is in Algerian territory, he said the Algerian government provides scholarships for the children of the camp - who spend most of the year away from their families receiving an education that produces little opportunity for advancement.

"No matter how smart or educated you are, there's a high chance you'll end up in the refugee camp, where there are no jobs," Smara said.

Additionally, he said international economic woes in recent years have led to a decline in the humanitarian aid that is so vital to the refugees' existence.

That is part of why the garden project could make such a big impact on the camp.

"For me, growing up, I had a lot of health problems because of nutrition - until the age of 7 or 8 we were lacking in fruits," Smara said. "It also will help having something you own, developing self-sufficiency - people do want to start something that keeps them busy."

The Westminster students have modeled their project after the U.S.-based Not Forgotten International, which has instituted more than 60 organic gardens throughout refugee camps near Tindouf, Algeria.

"We decided it was a great way to keep sustainability," Mormann said. "They've already been proven and there aren't any in this camp."