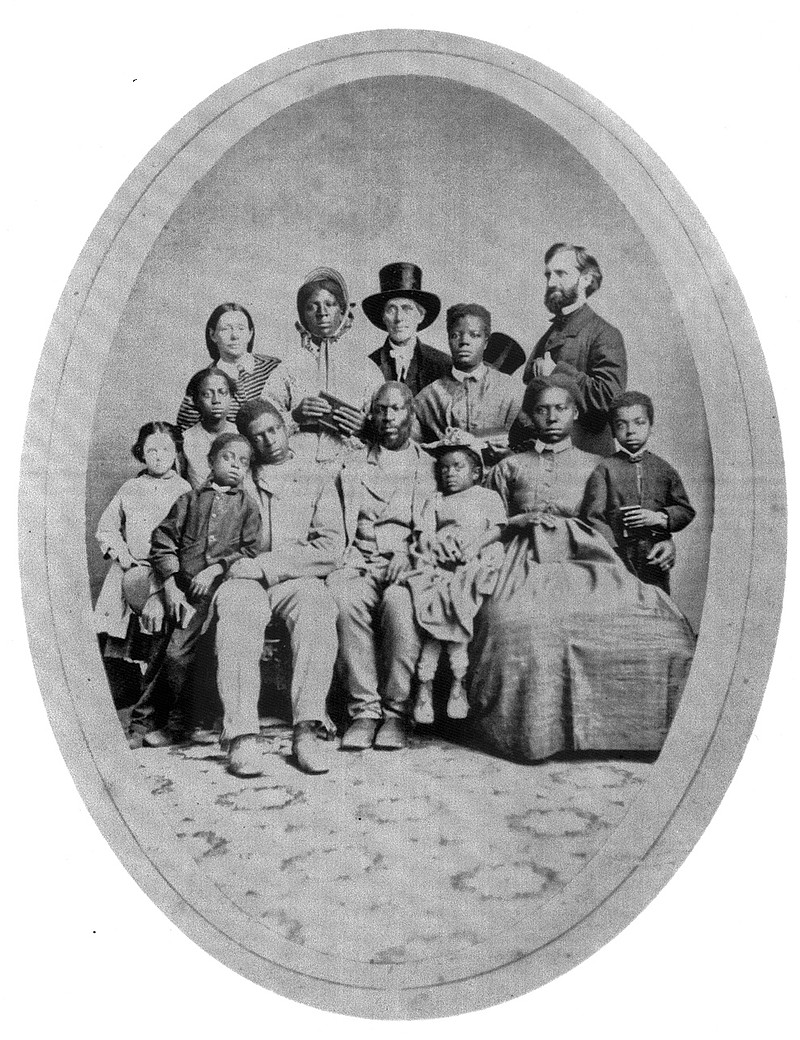 Contributed photo: Sylvia Rummel says her great-great-great grandfather shown in the back row of the far right worked with Levi Coffin (back row, center) to help the slaves pictured escape through the Underground Railroad.

Sylvia Rummel had heard the family stories about her great-great-great grandfather being a part of the Underground Railroad in the 1800s, but it wasn't until recently that more light was shed on his involvement.

Rummel, of Fulton, started making some calls last week to find out more about her ancestor, Jonathan Cable. About a month ago, her cousin had sent her an old photograph of Cable that has been in the family for generations. Cable is Rummel's mother's maiden name, and the photograph had been in the possession of Rummel's great-aunt, Joyce Cable Miller, until she died last March at the age of 104. Her great-aunt had always identified one of the men in the photo as Jonathan Cable and one of the others as Levi Coffin. Rummel said the black family in the photo is thought to be a slave family Cable and Coffin were hiding at Cable's house, a stop along the Underground Railroad.

According to historical records, Coffin was well-known for his efforts to help slaves escape to freedom in the north and is sometimes referred to as the "president of the Underground Railroad." Coffin moved to Cincinnati, Ohio, in 1847, where Cable was living.

Rummel called Saundra Jackson to talk to her about the photo and glean more information about Coffin and Cable. Jackson is the secretary/treasurer of the Levi Coffin House Association, an organization the operates the Levi Coffin State Historic Site in Fountain City, Ind.

Jackson said the association is only aware of four photographs of Coffin in existence, so the possibility of there being another one was an exciting one. Coffin mentions Cable in his book, "Reminiscences of Levi Coffin."

"We know that there's a connection between (the Cable) family and Levi Coffin," Jackson said.

Rummel sent a copy of her family's photograph to Jackson, which Jackson said will be added to the collection at a new visitors center that's being built at the Levi Coffin House. She said each new piece of information adds to the association's knowledge of the Underground Railroad, especially since much of the inner workings of the Railroad had to be kept secret for so long.

"It's kind of like a puzzle putting the Underground Railroad back together," Jackson said.

Rummel said she's proud that her relative, a Presbyterian minister, was involved with the Underground Railroad. Rummel said with it being Black History Month, it seemed a good time for her to dig into the past and try and find out more about her great-great-great grandfather and the Underground Railroad. Being able to read Coffin's comments about her ancestor helps her to get an idea of him.

"It's nice to know something that's detailed about a relative that's that far back," Rummel said.