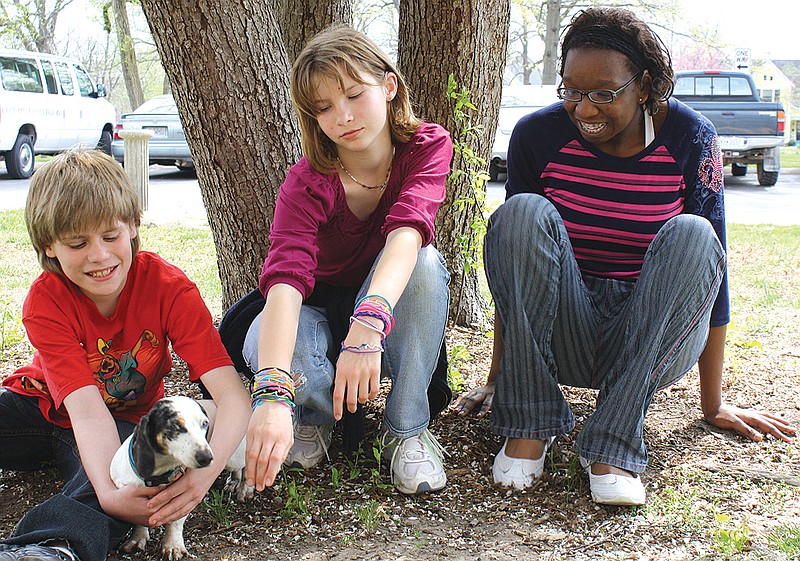 Jessie Ergmann holds Sparky as Cheyenne Dickerson lets the dog sniff her hand and Cherel Croom watches. These three Missouri School for the Deaf students are some of the many at the school who have bonded with the deaf dachshund.

Seeing Sparky, a 1-year-old deaf dachshund, nosing his way around the Missouri School for the Deaf campus or snuggling in the arms of a student has become a common site at the school. The zippy, little dog has also become quite the celebrity in the four months he's been MSD, even receiving a film offer.

Sparky's life was not always so secure. MSD Superintendent Barbara Garrison said before the dachshund was rescued by an animal shelter, he was at a pet store where he was scheduled to be destroyed because he couldn't hear. The shelter brought him to South Central Correctional Center in Licking. SCCC is one of the prisons in Missouri that participates in Puppies for Parole, a program that pairs rescued dogs with inmates in the State of Missouri Department of Corrections system for training, in order to make the canines more adoptable. The prison contacted Garrison about adopting the dachshund and she accepted.

Sparky's unique story has captured the attention of many. Garrison said sometimes she feels more like Sparky's agent than a superintendent because of how many phone calls and interviews she's taken since the dachshund's story first hit the media on Feb. 1 in The Fulton Sun.

Since then, Sparky's story has been told through many news outlets such as The Associated Press, Reuters, MSNBC.com, The Week magazine, The Daily Mail and in various newspapers. Fox 2 News out of St. Louis aired Sparky's story last week, and he will be featured in an upcoming People magazine article.

Garrison said Sparky's ability to understand some signs such as "come," "sit," "stay," "outside," and "no," makes him stand out from other dogs. Although, she added, the idea of a dog learning sign language is not new.

"There's a mystery, I think, out there about state residential schools and why they even exist anymore," Garrsion said. "So, I think, it's just the idea of a deaf dog finding a home at a school for the deaf that just intrigues people."

Sixth-grader Cheyenne Dickerson asked permission for Sparky to stay overnight in her dorm for her 13th birthday.

"I take care of him," Dickerson signs through Garrison. "He plays with me and my dolls."

Dickerson said she likes the special connection to the deaf dog since he can understand her signs and not all dogs can.

Fifth-grader Jessie Ergmann, 12, agrees, signing, "I think he understands, whereas a hearing dog wouldn't understand what I'm signing to him."

Ergmann was the first student at MSD to hold Sparky when Garrison brought him back from the prison. It didn't take long for them to bond. The dachshund has many fans at the school including Cherel Croom. The 17-year-old sophomore has had the dachshund stay in her dorm overnight.

"It was my first time seeing a deaf dog," Croom said.

She said Sparky's learned some new signs since coming to MSD, and all the students agreed that Sparky has adapted well to his new home.

After May graduation, Garrison intends to pursue an offer from LightStream Entertainment who contacted her about putting Sparky and a deaf student in some scenes of a movie. The film is in the early production stages and would be filmed in Europe. The plot involves individuals in the deaf community overcoming the perception that they are disabled. Garrison said she's favorable to accepting the offer, especially since the film includes deaf actors which she said are often overlooked.

"I certainly like the story line," Garrison said. "Anything we can do to promote the arts and individuals in the arts, we'd love to do."